I want to share with you the significance for me, a Palestinian human being, of walls and fences; birds and airplanes; and the power of voices to disrupt the stifling silence of collective punishment. I am writing today because Mondoweiss journalists have helped me challenge those walls—get closer to the freedom of a bird or plane in flight—by respecting, reporting, sharing and amplifying my voice and so many others. 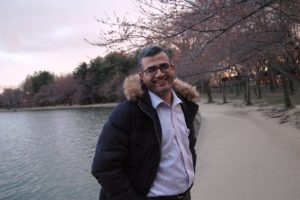 I wrote on Facebook in January 2018, calling for demonstrators and international media to march peacefully to—or beyond—the border with Israel. I urged my people to challenge with our bodies and our voices the wall that prevents our movement. Israel’s fences and walls keep us from our villages, our homeland and indeed from freedom itself. The Facebook post went viral. And since March 2018, tens of thousands of Gazans have massed at the border week after week in the Great March of Return, and to this day we continue to express our demands without violence.

I believe the solution is near and possible, far more so than we imagine. It requires, above all, courage to take initiative and adopt a new perspective—but also, the ability and channels to speak out and be heard.

IMPRISONMENT: FENCES AND WALLS
Ever since I was a little kid, my memories have been tied to the fence and the wall. I was born in Rafah, a border city between occupied Palestine and Egypt. It was originally one city, but was split into two parts following the 1979 treaty between Egypt and Israel. Hundreds of families were split by construction of a separation fence—and one of them was my family. As a boy, I used to go to the fence with my father in order to talk to my aunts on the other side by megaphone.

One of my aunts lived in a refugee camp in Palestinian Rafah while her daughter lived with her husband in Egyptian Rafah. One day in 1993, during a curfew imposed by the Israeli army, my aunt received news that her daughter on the Egyptian side of the fence had suddenly passed away.

My aunt went out running to the fence, just meters away from her home. An Israeli officer tried to stop her, saying “Go home.” My aunt kept walking and sadly said, “My daughter died, I need to see her.” She got to the fence and stood there watching while her sisters on the other side brought her daughter’s corpse for her to pay her final respects. Her only farewell to her child was through a fence—no hug, no last kiss. 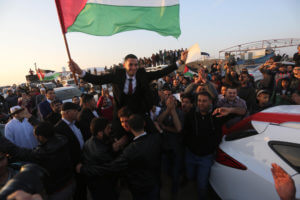 Like all youth in Gaza, Alaa Shahin faces very limited prospects for employment, travel or a life with dignity. Nevertheless, he chose to celebrate his wedding at the Great March last year. Photo by Mohammed Asad.

Israel claims that it withdrew from the Gaza Strip in 2005, but the reality has not changed substantially. Severe restrictions prevent people from leaving or entering Gaza, and control the movement of essential goods. Because of Israel’s control, the vast majority of young people in Gaza have never left this narrow place even once. They have never had the chance to get acquainted with other cultures.

You and the rest of the world need to know both the searing pain of personal stories like that of my aunt and the broader overview of generations imprisoned and deprived. We need to educate those who, thank God, will never experience the constricted world of Gaza in person; and journalism is crucial in conveying our reality.

GLIMPSES OF FREEDOM: PLANES AND BIRDS
When I was twenty-eight years old, I traveled for the first time through the Rafah crossing. When I arrived at the airport in Cairo, I stood staring up at the sky. The only planes flying in the Gaza sky are Israeli war planes, so for me and all those I lived with, the sight or sound of a plane is linked to bombardment and death. Standing there in the Cairo airport, I felt for the first time what people the world over feel. Watching planes land and take off, I understood for the first time: A plane may symbolize life and human activity as well, not always death.

My longing for freedom from the heavy reality of the blockade and the walls of separation is awakened, of course, not only by planes. Standing near the Israeli separation fence east of Gaza, I watched pretty birdies flying free on both sides of the fence hundreds, perhaps thousands of times through my life. No one stops their freedom. I saw it again in early 2018, and felt all the sadness and anger yet again. I expressed my feelings on Facebook: “Why can we not be like birds, roaming freely? Why do Palestinians die in this besieged little prison? Why don’t we go knock on the walls of the prison?”

The Palestinian public interacted and sympathized with this post because it touched their deeper feelings. The idea turned into a large mass movement called the Great March of Return in which tens of thousands of Palestinians participated. We came to the border, and we spoke out. We raised our voices to call for justice. And we did it in such numbers that the world had to hear. 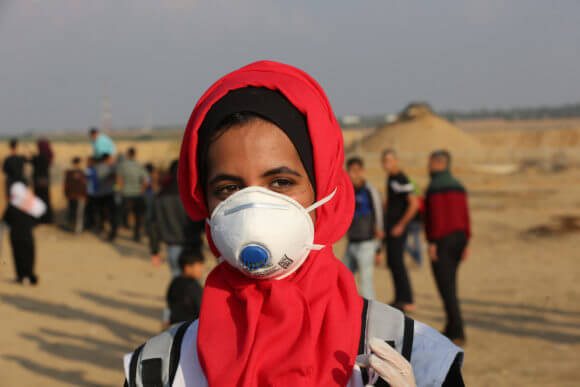 The Great March of Return in Gaza. Photo by Ashraf Amra

The Israeli response to the peaceful demonstrators is evidence of just how powerful our voices can be; the reaction was violent and bloody, extreme actions in order to keep Palestinians under occupation and apartheid. The Palestinians want freedom and dignity, and Israel cannot abide the voices that call for those fundamental rights. That is why publishing our voices, our demands and our stories is an essential part of the struggle.

Millions of Palestinians remain isolated from the world behind the Israeli walls, and are still victims of the policies of displacement, occupation, and settlement. Israel wants the Palestinians to die silently, and it wants the world to accept the policies of displacement, occupation and racism that it is practicing as normal. But we will not be silent; we will continue to broadcast our voices to the world.

Mondoweiss does a great job of communicating the voices of the persecuted oppressed people in Palestine. We need voices aligned to people who are fighting for freedom; we need these partners in our struggle to persist and continue strong.

Do not allow the Palestinian people to be killed twice, once in their land and once in the absence of their voice. Please, if you share my vision of a just future for Palestine, support the noble work of Mondoweiss. I am thankful for their help ensuring the world hears Palestine’s voice.

“Israel” thinks that killing women and children is a victory