Arrogance and complacency is the core of Trump son-in-law Jared Kushner’s plan for the final extinguishment of Palestine.

It is a continuation of the 1947 UN Partition Plan that was rejected by the non-Jewish citizens of Palestine living under British Mandate rule. That plan allotted a majority of the land, including the arable land, to the minority of the population that was recently arrived Jewish settlers.

Starting in late 1947 and in the ensuing 1948 war, a majority of Palestinians were made refugees outside of the new State of Israel, in large measure forced from homes and villages in operations conducted by Zionist forces, as the state of Israel expanded beyond the 1947 UN partition proposal.

In the June 1967 war, Israel occupied the remainder of Palestine.

The new Trump/Kushner January 28 proposal expands Israel sovereignty into the West Bank and all of the Jordan River valley, a portion of Syria, and the city of Jerusalem that was to be an international city under the 1947 plan. 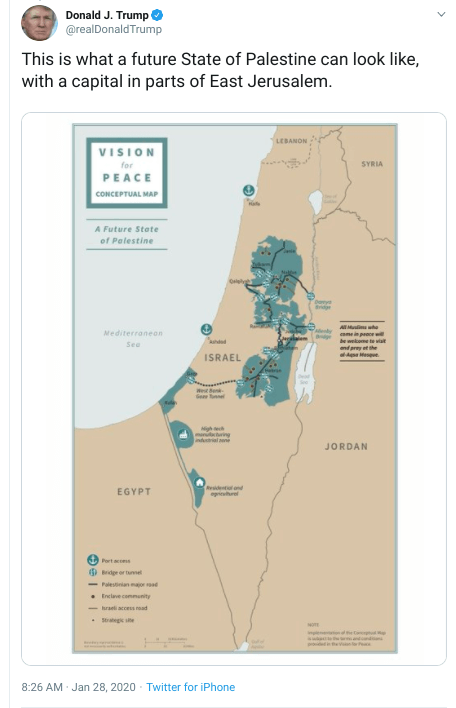 “If boundaries to an Israeli State, any boundaries, had been set and guaranteed by the Great Powers, peace might return to the area. On the contrary, we have actually a victorious state which is limited to no frontiers and which is determined that no narrow limits shall be set. The Near East is faced with the almost certain prospect of a profound and growing disturbance by Israel which may last for decades. Instead of restoring the boundaries of the province of Judea as they were in 70 AD, the Israeli leaders now state freely, though usually unofficially, their demand for an ever-expanding empire. Their present possessions are regarded by them only as a beachhead into the Arab and Muslim world, a large part of which they intend to exploit.”

The Trump/Kushner plan includes “trading” remaining Arab Israeli communities to the new Palestinian entity because they are not Jewish. The plan is to constrain and isolate Palestinian life within a fraction of the former Palestine, consistent with the Judaization program of the State of Israel.

In a round of interviews, Kushner touted the plan. Kushner’s interviews formulated that Palestinians should take the deal rather than continue defiance of Israel that has doomed them to their low and conquered state. He characterized Palestinian resistance in the face of consistent Israeli expansionism as unreasoning and indicative of in-built deficiencies of character.

About lands Israel has held and settled since 1967, Kushner told CNN’s Christiane Amanpour, with indifference to the 100-plus year history of Palestinian displacement and incremental loss:

A lot of these areas, just the reality is that Israel’s there and they’re not leaving. There’s never been a deal where they’ve contemplated doing that and it’s not pragmatic. I’m not looking at the world as it existed in 1967, I’m looking at the world as it exists in 2020. You have five million Palestinians who are really trapped because of bad leadership. So what we’ve done is created an opportunity for their leadership to either seize or not. If they screw up this opportunity, which again, they have a perfect track record of missing opportunities, if they screw this up I think they will have a very hard time looking the international community in the face, saying they’re victims, saying they have rights. This is a great deal for them if they come to the table and negotiate, I think they can get something excellent.

Kushner’s depiction of Palestinians recalls the contempt that Europeans held for inhabitants of the New World they settled, and the strategy of native reservations of the US and Canada. The Trump/Kushner proposal, with a convoluted map of barriers and one of the world’s longest tunnels, is an effort to avoid the simple solution of equality in Palestine.

They rejected it before they saw it. They thought it wasn’t going to be as good as it was. So I think they look quite foolish today. Also, one of the great ironies is they keep saying they want to be a state. If you’re a state you don’t call for days of rage when you don’t get what you want. So this is a real moment for them to show the world, are you ready to become a state or not?

I think also the Palestinians probably need a little bit of time to take a cold shower and to kind of digest the plan and read it. I think they’re getting a lot of phone calls from a lot of people saying, Hey guys, you prepared your response before you actually read the plan.

Once you read it, this is pretty good. And I think that what they’ll do is, they’ll really, if the Palestinians reject this and they don’t do negotiations, they’ve put themselves in a totally undefensible position, right? If Abbas is always saying, he wants the rights of his people, he wants the state, he wants to be recognized, but he’ll be flexible on everything else, well now he’s got a real offer on the table. So if he rejects it I think he’ll lose whatever credibility he has left, and I don’t think he can afford to do that.

He’s gotten them to spend the time, sit down, go through a detailed proposal. If you look at the orignal proposal, the Arab peace proposal, the (2002) Arab peace initiative, that was an eight-line proposal, it was a good-faith proposal. This is an 80 page proposal, with a map. Never been done before.

Kushner’s concentration on US reassurance of Israel fits with a strategy that Israel’s advocates have pursued with the US government for all of Israel’s existence. Jacob Blaustein of the American Jewish Committee told the State Department in 1953 that if the US was especially sympathetic and reassuring to the Israelis, that would lead to better and more flexible behavior by the Israelis. At the same time, he said that Arabs should not be encouraged by too much sympathy so they would not be emboldened.

Blaustein promoted twin concepts that “Israeli psychology” would be improved by support and arms, and “Arab psychology” by strategic distance.

This gives them (Palestinians) a pathway to really achieve everything they’ve always spoken about. And hopefully once they go through it, they’ll have the courage to do what they’ve done. (sic) But again, the Palestinian track record is perfect in not being able to make a deal. But this opportunity is available only because of President Trump’s leadership.

In the plan, Reuters reported, “A redrawn, demilitarized Palestinian state would be subject to Israeli security control, receiving tracts of desert in return for arable land settled by Israelis.”

In a talk five decades ago at Hillel House at the University of Chicago, philosopher Leo Strauss mentioned that Leon Pinsker’s Zionist manifesto “Autoemancipation,” published in 1882, quotes the classic Hillel statement “If I am not for myself, who will be for me? And if not now, when?”— but leaves out the middle of the sequence, “If I am only for myself, what am I?”

“The omission of these words,” Strauss said, “is the definition of pureblooded political Zionism.”

The goal of Zionism was a new Jew, confident and sovereign. The goal may have been achieved: a new Jew in the world, at the price of creating a subjugated people.

The wedding of the Jewish collective to the ethnic cleansing and torment of the gentiles of Palestine shames us before others, and to ourselves.

A Palestinian journalist was shot on his eye

Remembering the Mavi Marmara ship in 2010