When the Palestinian Authority (PA) first announced a state of emergency over the coronavirus in early March, an initial panic swept over the occupied territory, as checkpoints and borders with Israel were closed, and entire cities were shut down.

In the early days of the outbreak, which was initially contained to the city of Bethlehem, there was a joke going around between Palestinians that, perhaps, a global pandemic could offer a temporary respite from the terrors of the Israeli occupation.

But even as most aspects of everyday life have been turned upside down in Israel, Palestine, and the rest of the world, the one thing that has remained steady in the lives of Palestinians, is the presence of the occupation.

Despite widespread shutdowns, curfews, and quarantines, Israel has continued to raid Palestinian cities and towns, arrest and imprison Palestinians, demolish homes and tear down structures, and facilitate attacks carried out by settlers.

Palestinian activists, leaders, and civilians have urged an end to the occupation’s activities in the West Bank, Gaza, and East Jerusalem, saying that Israel is only further putting Palestinian lives at risk by violating basic global health recommendations of social distancing.

In the time of a global pandemic, when most of the world is just trying to stay healthy, Palestinians are stuck between worrying about their health and safety, and the fear of losing their land, homes, and lives to the occupation.

Palestinian news networks and social media have been inundated in recent days with reports of Israeli forces conducting raids in Palestinian cities and towns.

Similar instances of soldiers and settlers spitting on Palestinian property, seemingly in an attempt to spread the virus among the Palestinian population, were reported in Ramallah city and the Beit Iksa village northwest of Jerusalem.

In Gaza, Israeli forces reportedly opened fire on Palestinian farmers on the outskirts of the southern Gaza Strip, near the border fence.

Meanwhile, in East Jerusalem, Israeli forces sparked outrage after they were recorded arresting four Palestinian volunteer health workers as they were disinfecting public facilities outside the Lion’s Gate of the Old City. Israeli forces also seized the sanitation equipment being used by the volunteers.

Similarly, in the West Bank town of Hizma, north of Jerusalem, Israeli forces reportedly assaulted teams of volunteer health workers stationed near the entrance of the town and subsequently raided and ransacked the headquarters of the local emergency committee in charge of combating the spread of the virus in the town.

Local NGO Grassroots Jerusalem condemned Israel for the arrest of the volunteers in the Old City, as well as its continued implementation of “colonial policies that even the pandemic has failed to stop.”

“The occupation ‘business’ is continuing as usual even in these times of pandemic,” the group said on Facebook.

“On the one hand, Palestinians in Jerusalem are fearing the spreading of the virus in their communities, and its grave effects on the economy in Jerusalem, as it depends mainly on tourism. On the other hand, they continue to face the already existing – and continuing – challenges of the Israeli occupation and its policies in the occupied city.”

Since a state of emergency was declared in Palestine on March 6, the group the Euro-Mediterranean Human Rights Monitor has documented 207 Israeli incursions into Palestinian cities in the West Bank and East Jerusalem.

The group slammed Israel for “completely ignoring the dangers this behavior might cause in light of the spread of the infection in Israel.”

“These practices pose a public health threat and make it easier to spread COVID19 among Palestinians,” the group continued, adding that it holds Israel, “as an occupying power, fully responsible for these dangerous practices, and demands an immediate cessation of these practices.”

Reports of settlers razing lands and establishing new outposts on the outskirts of Bethlehem and Ramallah prompted local officials to accuse settlers of taking advantage of the coronavirus lockdown in order to seize more land.

“As we are in lockdown in Palestine and the settlers are on the rampage, Israel should take back its settlers and keep them there,” senior PLO official Dr. Hanan Ashrawi tweeted.

In the Jordan Valley, which has seen a significant increase in settler activity ever since US President Donald Trump gave the green light for Israel’s annexation plans in the area in January, settlers have been attacking farmers and setting up new tents and caravans on Palestinian land.

The notoriously violent settlers of Hebron have continued to ignore shelter-in-place orders, attacking Palestinian homes in the Old City, injuring a young Palestinian mand and woman earlier this month.

Similar attacks and injuries were recorded in Nablus and Ramallah, in addition to reports of settlers throwing rocks at Palestinian motorists in a village outside Jenin.

Israeli authorities made headlines last week after they raided the Jordan Valley herding community of Khirbet Ibziq and confiscated materials that were being used to set up an emergency field clinic for the area, which is home to dozens of rural communities that lack access to proper healthcare and facilities. 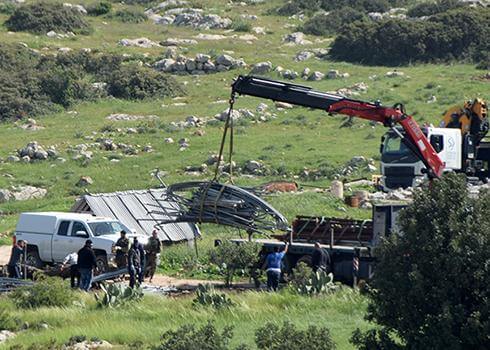 Officials from Israel’s civil administration, along with a military escort, confiscated poles and sheeting that were going to be used to establish the field clinic, as well as emergency housing for residents in case they were forcibly evacuated from their homes — a regular occurrence due to Israeli military training in the area.

A tin shack, power generator, sand, cement, and cinder blocks were also confiscated, while a bulldozer demolished the foundation of four of the tent floors.

“As the whole world battles an unprecedented and paralyzing healthcare crisis, Israel’s military is devoting time and resources to harassing the most vulnerable Palestinian communities in the West Bank, that Israel has attempted to drive out of the area for decades,” Israeli human rights group B’Tselem said in a statement.

Calling the demolition of the under-construction clinic “shocking,” B’Tselem said the incident was an “especially cruel example of the regular abuse inflicted on these communities,” adding that “it goes against basic human and humanitarian principles during an emergency.”

B’Tselem continued: “Unlike Israel’s policies, this pandemic does not discriminate based on nationality, ethnicity or religion. It is high time the government and military acknowledged that now, of all times, Israel is responsible for the health and wellbeing of the five million Palestinians who live under its control in the Occupied Territories.”

Over the past few weeks, Israeli forces have continued its routine practice of home demolitions across the West Bank and East Jerusalem, demolishing homes and agriculture structures in areas around Jericho, Ramallah, Jenin, Salfit, and Hebron.

According to UN documentation, in the first two weeks of March, Israeli forces demolished at least 16 homes and structures, displacing 35 Palestinians in a time when global health officials are urging people to stay at home as the safest way to protect themselves and their communities.

On Wednesday, Palestinian Prime Minister Mohammed Shtayyeh, who has taken the lead role in Palestine’s fight against COVID-19, said that the “real weakness” in the Palestinian’s efforts to fight the spread of the coronavirus is the Israeli occupation.

Shtayyeh criticized the Israeli occupation’s “policies that attempt to thwart our efforts to protect our people,” referring specifically to Israel’s treatment of Palestinian laborers and prisoners, who are emerging as one of the biggest threats to public health in the West Bank.

Over the past week, the number of confirmed cases in the West Bank has nearly doubled, with the majority of new cases being traced to Palestinian laborers who returned from Israel.

Additionally, one of the newest cases to be confirmed on Wednesday was from a Palestinian detainee who was just released from the Ofer detention center, sparking fears that an outbreak in the prison is imminent.

“The Palestinian workers’ continued movement, with Israeli facilitation, between their cities, villages, and workplaces, whether inside the green line or in the settlements, is a blow to our early efforts to stop the spread of this pandemic,” Shtayyeh said.

“Israel’s decision to allow the entry of workers is an attempt to protect the Israeli economy at the expense of the lives of our workers. Israel’s economy is not as precious as the lives of our children.”

Palestine losses about $2.5 billion due to coronavirus- statistics bureau