Israeli authorities agreed on Tuesday to halt almost all demolitions of illegal Palestinian structures in the West Bank for the remainder of the coronavirus pandemic.

The decision was relayed to the Association for Civil Rights in Israel, which had appealed to the Civil Administration, the Defense Ministry body responsible for carrying out the demolitions. ACRI had called the practice “inhumane,” particularly in the midst of a public health crisis.

ACRI reported that several demolitions and equipment seizures had taken place in the Jordan Valley late last month, including a tent that Palestinians say was going to be used as a medical clinic. The B’Tselem rights group also reported that demolitions continued in two Bedouin villages since the start of April.

“There is no justification for confiscating clinics and medical equipment at this time, and certainly there is no justification [for the seizure of] a would-be clinic for a community detached from medical resources, while the whole world is dealing with a pandemic whose reach is still not known,” ACRI attorney Roni Pelli wrote. 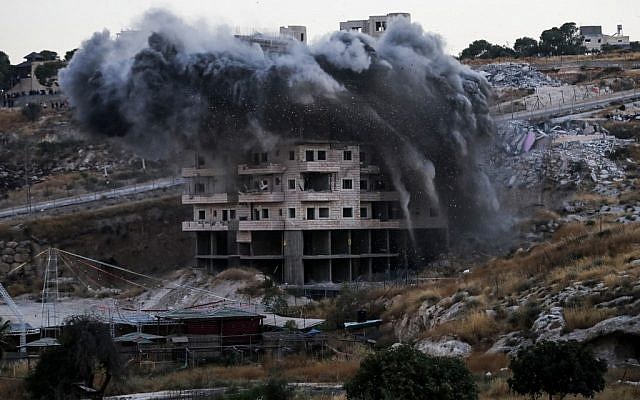 This picture taken on July 22, 2019, shows the demolition of a Palestinian building that was under construction in the East Jerusalem neighborhood of Sur Baher. (Ahmad GHARABLI / AFP)

In his Tuesday letter responding to Pelli, Civil Administration public inquiry officer Bar Yehudah wrote, “As a general rule, enforcement actions at the present time will focus on new illegal construction, in particular construction that was carried out to take advantage of the emergency situation.”

“As a rule, no final demolition orders issued for populated buildings will be implemented at this time, and efforts will be made to reduce friction with the [Palestinian] population,” he said.

He added that exceptions would be made for structures that are slated for razing due to security or public safety reasons.

In addition, extensions would be granted for stop-work orders — a decree that often proceeds a final demolition order.

In a statement, Pelli commended the decision while criticizing the recent demolitions of a water tank and an electricity line, which the Civil Administration officer admitted to carrying out in the memo.

“The demolition of critical structures providing water and electricity are life-threatening [actions] during this crisis, as the most significant directive to prevent the spread of the virus after social distancing is to wash hands and maintain hygiene,” Pelli said.

(Source: The Times of Israel)

“Israel” is hoarding the Jordan River, and Palestinian farmers are suffering because of it

Remembering the Mavi Marmara ship in 2010