Berlin, Germany – A German jury’s decision to strip British Pakistani author Kamila Shamsie of a literary prize, because of her pro-Palestinian activism, underscores how ignoring Palestinian rights has become normalised in Germany, according to pro-Palestinian figures in the country.

On September 18, days after its initial decision, the eight-member jury of the Nelly Sachs Prize, named after the German-Jewish Nobel laureate, a poet and playwright, withdrew its $16,000 award over Shamsie’s support of the Boycott, Divestment and Sanctions (BDS) movement.

In a statement, they said the “cultural boycott does not transcend borders, but affects the whole of Israeli society regardless of its actual political and cultural heterogeneity.”

BDS was established by Palestinian activists in 2005 to exert economic and political pressure on Israel to meet its obligations under international law and is modelled on similar campaigns by the United States civil rights movement and anti-apartheid fight against South Africa in the 1980s.

“If you are talking about Israel, or writing about Israel, you are entering a no-go or a dangerous area,” Iris Hefets, chairwoman of Jewish Voice for a Just Peace in the Middle East, a group of mostly Israeli, British and American Jews living in Germany, told Al Jazeera.

What happened to Shamsie is part of a pattern of censoring, intimidating and undermining artists and public figures for their political views, said Hefets.

Her own organisation had its bank account shuttered in June after sustained criticism from Israeli media and the Simon Wiesenthal Centre, a Jewish human rights organisation, for its support for BDS. 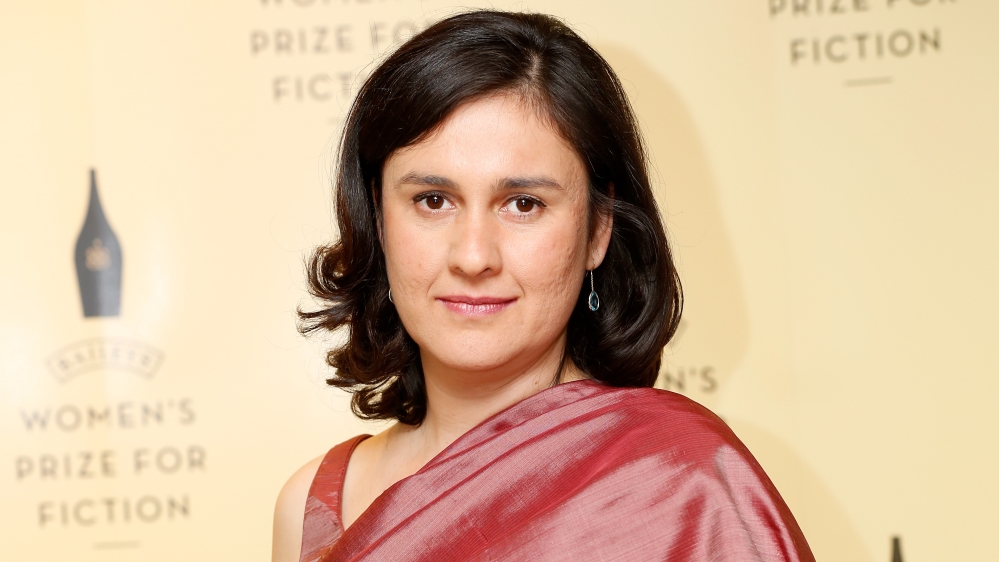 Author Kamila Shamsie was stripped of her $16,000 prize because of her support for BDS [File: Tristan Fewings/Getty Images for DIAGEO]

Germany’s Bundestag became the first European parliament to denounce BDS as anti-Semitic in May when it passed a multi-party resolution that compared the campaign with the Nazis’ boycott of Jewish businesses – saying it was “reminiscent of the most terrible chapter in German history”.

Though the motion was not legally-binding, it added weight to the argument that BDS and Palestinian rights advocacy were akin to anti-Semitism in Germany.

The effects are felt especially by the more than 200,000 Palestinians living in Germany, who are the targets of suspicion and censorship, according to Gaza-born Majed Abusalama, a political organiser with human rights coalition Palestine Speaks.

“BDS only demands basic rights. If demanding freedom, justice, equality and dignity is radical then Germany has failed to learn anything from its history,” said Abusalama, who will face trial alongside two Israeli activists over their disruption of a speech by Knesset member Aliza Lavie in Berlin’s Humboldt University in 2017.

“This censorship is a disgrace and I’m angry that Palestinians have to fight for places to speak in a country which claims to be a democracy,” he added.

But the parliament’s motion could face a legal test.

Last week, a German court ruled that the city of Bonn’s decision to exclude a pro-BDS Palestinian women’s group from a cultural festival constituted “unequal treatment” and violated the European Convention of Human Rights, which protects the freedom to boycott. 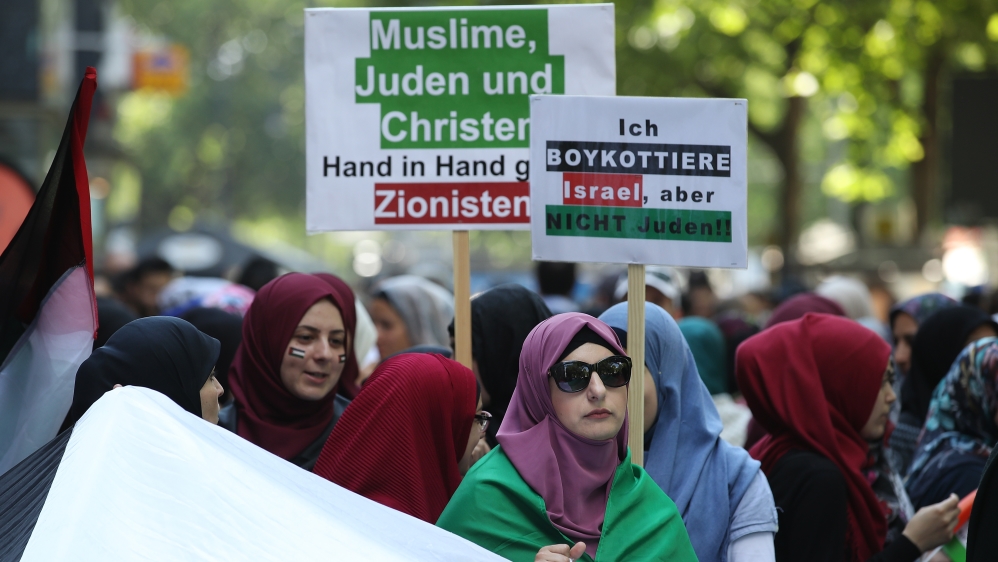 A woman holds a sign at a rally in Berlin saying ‘I boycott Israel, but not Jews!’ [File: Sean Gallup/Getty Images]

A spokesperson for the Berlin senate’s department of culture told Al Jazeera on Monday: “Calls for a cultural boycott against Israel [are] politically wrong and effectively anti-Semitic.”

They said the senate had defended Berlin’s annual Pop Kultur festival, which has been the subject of a boycott campaign for its partnership with the Israeli embassy, and “will also defend the artistic freedom of other cultural institutions and projects which might be affected by similar boycott calls.”

The capital city’s parliament passed ordinance last year rejecting “all anti-Semitic boycott campaigns”, as well as promising not to support to groups or individuals who “delegitimise the existence of Israel as a Jewish state or who otherwise act anti-Semitic”.

In June, Peter Schafer, director of the Jewish Museum in Berlin, resigned after the museum’s Twitter account quoted a news article about Israeli academics criticising the parliament’s resolution in a post condemned by several Jewish groups and the Israeli ambassador.

The museum had previously been criticised by Israel in a letter to Chancellor Angela Merkel for an exhibition that expressed a “Palestinian-Muslim view of Jerusalem”.

The letter also accused a number of other NGOs and institutions of intervening in Israel’s internal affairs or promoting anti-Israel activities, including the Berlinale film festival and Heinrich Boll Foundation, which financially supports the left-wing Israeli 972 Magazine.

The same month, Dusseldorf’s Open Source festival cancelled a performance by American rapper Talib Kweli after he refused to deny his support for BDS.

“All administrations of regions or cities, as well as representatives of public institutions, are asked not to give BDS any room or platform,” Philipp Maiburg, the festival’s artistic director, wrote to Kweli in an email, citing the parliament’s resolution.

“As we are also working with public funding we have no other choice than to ask you for an official statement concerning your position towards the BDS.”

Kweli hit back with a statement on his Facebook page, writing: “I would like to perform in Germany but I don’t need to. I’d rather be a decent human being and stand up for what’s right than censor myself and lie about BDS for a check.”

More than 100 leading cultural and political figures signed a public letter of support for Kweli, noting a “shameful trend of censorship” against pro-Palestinian voices in Germany.

But Hefets suggested that even as international artists speak out, cultural figures within Germany remain largely cowed or quiet, fearing that criticising Israel could risk their reputation, career or income in terms of funding.

“It’s very hard because [German artists] live on money from the German government and projects. It’s not like us activists who are quite independent.”

Palestinians refuse to pay for the sins of Germany. Germany should instead listen to Palestinians and the values of human rights and international law.

The battle has even reached Germany’s proudly left-wing club scene.

Last year, DJ collective Room 4 Resistance was banned from popular Berlin club About Blank for supporting BDS, which member Jason Zuzak said was part of a wider pattern of cancellations and withdrawn invitations across the country.

“The incidents took place, for the most part, at places that would definitely identify themselves as leftist and anti-capitalist, and in general standing in support of women’s rights, queer rights, usually doing things for migrants,” he told Al Jazeera.

The Palestinian Campaign for the Academic and Cultural Boycott of Israel (PACBI), which launched in Ramallah in 2004, has since called for the boycott of the Berlin club, as well as two others in Hamburg and Leipzig, for “glaring and persistent anti-Palestinian and anti-Arab racism”, noting one had posted a recruitment call for the Israeli army on its website.

Ultimately, according to Abusalama, the debate around whether BDS is anti-Semitic obscures the brutal effects of Israeli apartheid in areas like Gaza, where his family lives under total blockade.

“Palestinians refuse to pay for the sins of Germany,” he said. “Germany should instead listen to Palestinians and the values of human rights and international law.”

Investigations have been prompted by “Israel” lobby groups about Palestine