At around 7am local time, hundreds of special forces entered the mosque’s courtyard and began striking Palestinians observing Ramadan with batons in a bid to force them out. There were also reports of stun grenades being deployed.

In the silver-domed Qibli prayer hall, Israeli forces fired teargas at worshippers and blocked them indoors. For more than three hours, dozens of people trapped inside have not been able to evacuate people who sustained minor injuries.

The Palestine Red Crescent Society (PRCS) said its medics were also prevented from entering the mosque to provide first aid.

Translation: The message of trapped worshippers inside al-Qibli hall in al-Aqsa Mosque

Inside the Dome of the Rock hall at the centre of mosque’s complex, female worshippers were also blocked in and not allowed to leave.

Meanwhile, scores of Israelis, protected by heavily armed forces, stormed the courtyard of the mosque in different groups for hours after it had been mostly emptied of Palestinians.

Far-right Israeli activists and settler groups had announced plans to storm al-Aqsa this week in large numbers starting from Sunday to mark the Jewish Passover holiday.

Before dawn, Israeli forces increased their presence outside al-Aqsa’s gates and imposed restrictions on Palestinians trying to enter the mosque for prayer, eyewitnesses said.

The raid came 48 hours after another violent attempt by Israeli forces to clear al-Aqsa of Muslim worshippers on Friday.

More than 150 were wounded and at least 450 arrested as Israeli forces fired rubber-coated steel bullets, teargas and stun grenades inside the courtyard and prayer halls of the mosque.

Shiekh Ekrima Sabri, the imam of Al-Aqsa, told Middle East Eye the raid was a “premeditated and orchestrated attack” against Palestinians.

“They want to deter Muslims from coming to the mosque and allow Jewish intruders to storm Al-Aqsa,” the 82-year-old said.

Flanked by the police, Israeli settlers enter al-Aqsa Mosque on an almost daily basis, showing complete disregard for the site’s Palestinian Muslim administration and the thousands of worshippers who are usually at the site. 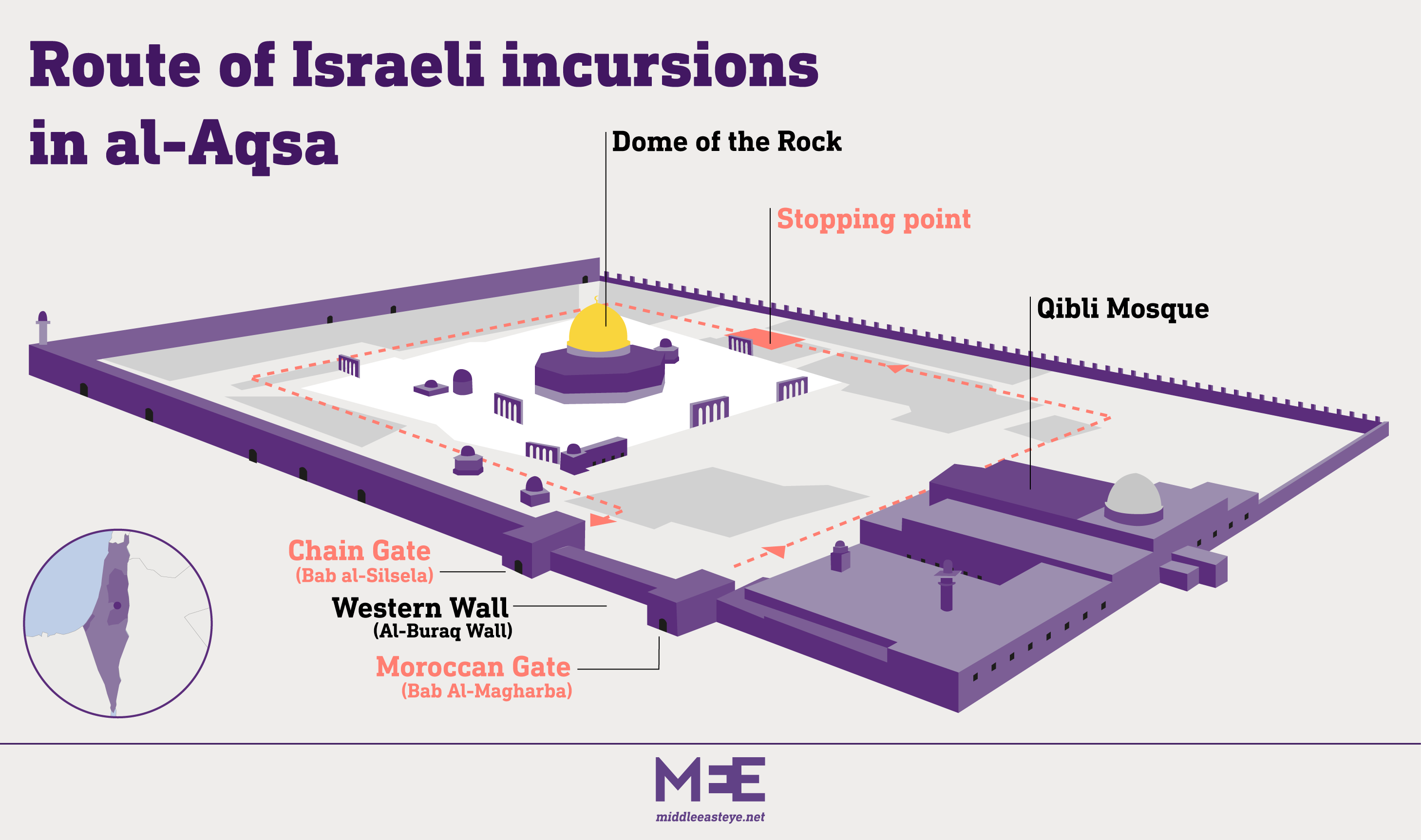 Such raids were often scaled-down and at times cancelled during Muslim holidays, such as in the holy month of Ramadan.

However, this has changed in recent years and settlers also began to perform prayer inside the mosque during their incursions, which is a violation of the internationally agreed status quo.

Israel’s control of occupied East Jerusalem, including the Old City, violates several principles under international law, which stipulates that an occupying power has no sovereignty in the territory it occupies and cannot make any permanent changes there.

This is a developing story…