The annexation of the Jordan Valley is the poison pill Netanyahu wants to leave behind. – In Palestine Today

Five months. That is what Prime Minister Benjamin Netanyahu is demanding: to serve as prime minister for the first five months in a rotation government before abdicating the throne to his political rival Benny Gantz. Netanyahu’s spokespeople say that that’s the time necessary for him to complete several important tasks — most importantly annexing the Jordan Valley. Netanyahu is willing to give up running the country as long as he can do what he hasn’t been able to do during his 13 years in office.

On its face, it’s a strange request. After all, third elections, should they take place, will only be held in late February or early March — three months from now, and until then Netanyahu will continue serving as transitional prime minister. Even if the right-wing camp is defeated, it will take Gantz at least a month to form a new government, which means Netanyahu is guaranteed the premiership for at least four more months. That’s without considering the likelihood that neither Netanyahu nor Gantz will be able to cobble together a government, which will leave the former in power for far longer than five months.

What, then, is the purpose of such a request? Netanyahu has rightfully earned the utter distrust of the public that he will stand by his word and call it quits in five-months’ time — even if a rotation agreement with Blue and White is formalized by the Knesset, and even if Netanyahu himself signs it. One need not be paranoid to be suspicious; it’s enough to read the newspapers. The idea that he can serve as prime minister — with the consent of Blue and White — while facing indictments is of utmost importance to Netanyahu, since it can aid him in case the next government falls apart and Israel goes to yet another round of elections.

But his request for five more months should be viewed in a broader political context. Netanyahu most certainly reads Makor Rishon, the right-wing newspaper associated with the settler movement, and he most certainly recognized that the paper now openly supports his departure. Editor-in-Chief Hagai Segal himself wrote that the prime minister must go; not because of the indictments or what they reveal about him — but because with Netanyahu at the helm, the right may very well lose the next elections. 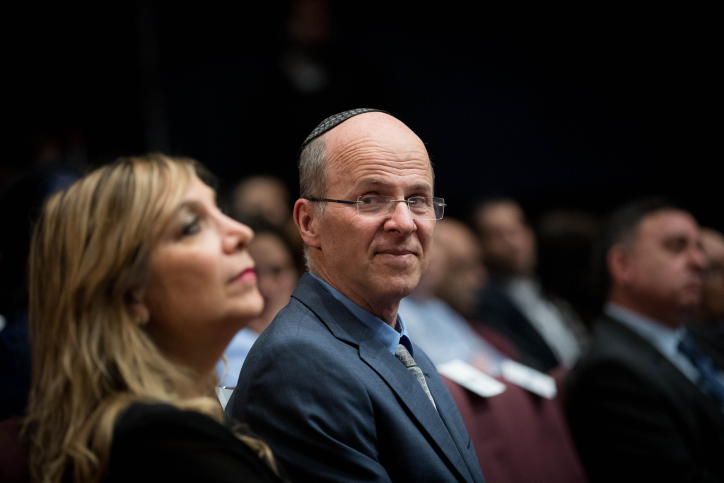 Segal, like the rest of the big names at Makor Rishon, is reading the polls; he knows that not a single one shows that right could get the necessary 61 Knesset seats to form a government. Moreover, the majority of the Israeli public, at least 56 percent, want Netanyahu to step down. In Segal’s eyes, the fate of the Israeli right — and particularly that of the settlement enterprise — is more important than the personal fate of Benjamin Netanyahu.

This approach goes beyond the pages of Makor Rishon. Yossi Dagan, who heads the Shomron Regional Council in the West Bank, and who has considerable power inside Likud, has already expressed his open support for Gideon Sa’ar, the Likud stalwart who hopes to replace Netanyahu at the top of the party pyramid. The nationalist right’s political leadership — comprised of Defense Minister Naftali Bennett, Bezalel Smotrich, as well as several prominent rabbis in the national-religious camp — are backing Netanyahu. One, however, cannot help but be suspicious of their support.

In this context, Netanyahu allowing Bennett to declare a new Jewish neighborhood in the heart of Hebron is seen as a down payment in order for the latter to continue to support the prime minister in his time of need. The same can be said about the decision to transfer NIS 40 million to the settlements, which was immediately followed by a statement of support for Netanyahu from the Yesha Council, the lobbying and political arm of the settlement movement.

It is possible that something beyond political trickery or a struggle for survival is propelling Netanyahu. It is entirely possible that Netanyahu understands that his political fate has been sealed and has now moved on to thinking about what kind of legacy he will leave behind. And his legacy, from the moment he entered politics, has been the thwarting of the establishment of a Palestinian state and ensuring exclusive Jewish-Israeli control from the Jordan River to the Mediterranean Sea. It seems he views this as his historical duty.

‎His first term, between 1996-1999, was dedicated to freezing the Oslo process, which he believed would lead to the establishment of an independent Palestine. It is true that Netanyahu was resigned to sign the Wye River Memorandum, which included the transferring of some West Bank territory to Palestinian Authority control. And yet, he was able to put the kibosh on Oslo.

Netanyahu has been in control for the past 10 years, four of which he ruled over a narrow, right-wing government. The last three years he has ruled alongside a supportive president in the White House, whose rhetoric often sounds closer to that of Israel’s extreme-right parties than Likud. And yet, Netanyahu has not taken advantage of this window to try and formally annex territories of the West Bank. Moreover, Netanyahu did not support a draft law to annex Ma’ale Adumim, a settlement east of Jerusalem, when it was brought before the Knesset in 2016, and generally ignored Bennett’s annexation rhetoric. So, what happened now to change Netanyahu’s mind?

Netanyahu has never directly responded to this question. But it seems that as long as he felt his rule was secure, he believed that annexation would only embroil Israel regionally and internationally. He was better off continuing the policy of creeping annexation, steadily erasing the foundations of the Green Line. This kind of process, according to Netanyahu, would prevent the establishment of a Palestinian state without raising the ire of the international community. And because he has a deep contempt for all those who surround him, he believed that he was the only one who could protect this fragile arrangement. That only he knows the secret formula.

From the moment his rule turns unsteady, however, the situation changes. On the one hand, he is entirely politically dependent on the nationalist right, even if its election prospects are in decline, and is thus forced to forgo his erstwhile strategy and adopt the rhetoric of Smotrich and his ilk. On the other hand, it is possible that Netanyahu wants to ensure that whoever takes his place, be it Sa’ar or Gantz, will be bound to the project of preventing a Palestinian state. The annexation of the Jordan Valley — or rather the North Dead Sea — is precisely such a step. It is the poison pill he wants to leave behind.

Even if Netanyahu succeeds in his mission to annex the Jordan Valley — what currently seems very unlikely — it won’t be the end of the road for the two-state solution as many claim, but it certainly will strike a blow, making it impossible in the eyes of both Israelis and Palestinians. Nothing would make Netanyahu happier, even if it means looking on at the reality he has helped create from the window of his prison cell.