On Friday, the House of Representatives overwhelmingly passed H.Res.326, a resolution that reaffirms the United States’ commitment to a two-state solution. Nearly every Republican voted against the legislation, but the only Democrats to oppose it were Rep. Ilhan Omar (MN), Rep. Rashida Tlaib (MI), Rep. Alexandria Ocasio-Cortez (NY), and Rep. Ayanna Pressley (MA).

The resolution was scheduled to come to the floor this summer, but the bill’s cosponsors clashed with hawkish, pro-Israel Democrats who pushed back against some of the language in its text. According to reporting by Politico, lawmakers like Rep. Eliot Engel (NY) did not want the bill to reference the two-solution as the “only” possible resolution to the conflict.

A reference to the “broadly held consensus” on the two-state solution was ultimately removed from the text. Additionally, Rep. Karen Bass (CA) cut out all mentions of occupation from the text, in a failed effort to drum up GOP support for the legislation. “When you want to get as many people on board as possible, you have to negotiate,” a staffer for the bill’s author, Rep. Alan Lowenthal (CA), admitted at the time. Rep. Josh Gottheimer (NJ) also added an amendment to the text committing the United States government to a continued policy of unconditioned military aid for Israel.

Today, I believe we are squandering a real opportunity to support peace in Israel/Palestine.

Here is why I can’t support the final version of H.Res 326, a resolution about U.S. support for a two-state solution that I fear will make it impossible to ever bring about that peace.

– Annexation of Palestinian land in the West Bank

After I and many progressives cosponsored, the resolution was altered to remove the word “occupation.”
It also removed a reference to the “broadly held consensus” on the two state solution.

Here is what they took out.

After I and many progressives cosponsored, the resolution was altered to remove the word “occupation.”
It also removed a reference to the “broadly held consensus” on the two state solution.

Here is what they took out.

Then @RepJoshG introduced an amendment committing to “ironclad” support for $38 billion in military aid to Israel with no conditions—essentially eliminating any potential leverage the U.S. has to bring about peace.

247 people are talking about this

We cannot be silent about settlement expansion, move the U.S. Embassy to Jerusalem, and undermine any steps to create a Palestinian state, and still claim to support peace.

This isn’t a criticism of @RepLowenthal or @jstreetdotorg—who have been champions of a clean two state resolution.

It’s a criticism of the pro-occupation establishment who tried to undermine them at every turn.

Rep. Tlaib, who is the first the first Palestinian-American woman in Congress, rose to oppose the resolution on the House floor. She cited her Palestinian grandmother as an inspiration for her vote and drew a direct parallel between Israel’s current policies and those of the United State’s under Jim Crow. “Given our nation’s history of segregation, we should recognize when such injustices are occurring,” she said, “We cannot be honest brokers for peace if we refuse to use the words ‘illegal occupation by Israel.’

I spoke today as the proud granddaughter of a strong, loving Palestinian woman in opposition to #HRes326. We must take bolder actions to ensure human rights are upheld in Israel and that Palestinians and Black Israelis are treated with the equality every human being deserves. 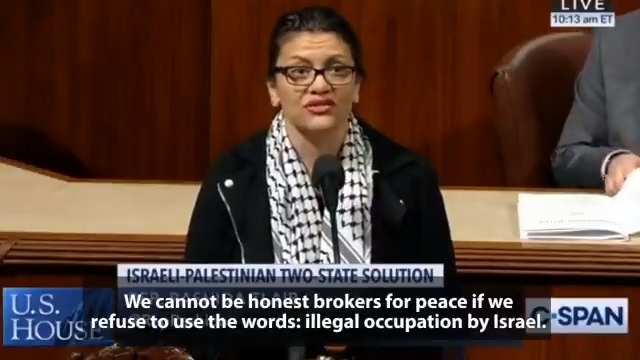 Rep. Betty McCollum (MN), who introduced a historic bill to promote the rights of Palestinian children earlier this year, voted present. “I signed on to a bold, meaningful two-state solution resolution,” she tweeted, “Unfortunately, H. Res. 326 has been amended in a way I can no longer support.”

I signed on to a bold, meaningful two-state solution resolution. Unfortunately, H. Res. 326 has been amended in a way I can no longer support.

I will be voting present. See my full statement here: https://bit.ly/33UHdv3

As a co-sponsor of H. Res. 326 as introduced on April 25, 2019, I support Representative Lowenthal’s determination to advance U.S. leadership in seeking a diplomatic resolution to achieve a “two-st…

Palestinians defy segregation all the time.

Palestinians are resisting more than one occupation