On Sunday, December 8, the American media network CBS aired a report on its “60 Minutes” show, which is one of the oldest news programs in America. The topic of this program was about Rawabi, which is described as Palestine’s first planned city, one that could serve as an “example” of what a Palestinian state could look like.

Rawabi is a city located about 6 miles north of Ramallah, and is funded by the Palestinian-American, multi-millionaire businessman Bashar Masri, as well as the government of Qatar. So far, it has come with a price tag of at least $1.4 billion. According to Business Insider, Rawabi is the “largest private sector project in Palestinian history.” CBS adds that Rawabi has created about 5,000 jobs for Palestinians, mainly in construction, engineering, and retail. Rawabi is supposed to feature apartments, luxury retail stores, an amphitheater, cafes, an outdoor amusement park, and other attractions– all of which are unaffordable for the average Palestinian.

To the average observer, the development of Rawabi sounds like a positive achievement. It implies that even under Israeli occupation, Palestinians can build and thrive economically. In other (condescending) words, Israel is not responsible for the economic stagnation of Palestine’s economy. If only Palestinians would get their act together, they would be able to improve their situation.

But this is far from the truth. Rawabi, or any other Palestinian city, town, or village, for that matter, can never achieve its full potential as long as it remains under Israeli military occupation and domination. 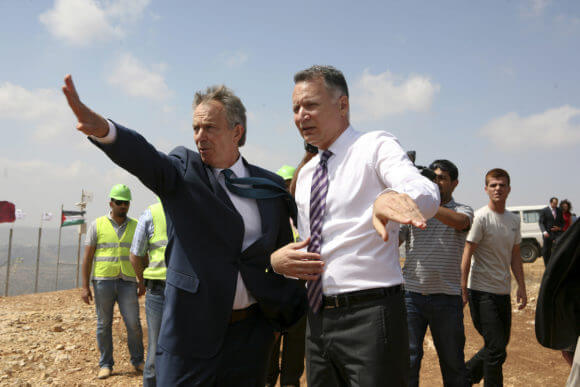 It is extremely difficult for Palestinians in Area C of the West Bank and occupied Jerusalem, which are under full Israeli control, to obtain permits to build on their own land, or even to renovate and expand their homes to meet the needs of their growing families. This has caused their towns to turn into crowded ghettos or forced Palestinians to build without permits. On a frequent basis, Israel demolishes many of these homes at the expense of the owners. It is the high-profile nature of Rawabi, and the involvement of influential people on all sides, that allowed Rawabi get to this point.

In Masri’s own words, “Israel hasn’t made it easy” for him to develop Rawabi. Israeli “bureaucracy,” as well as Israeli right-wing opposition, hindered his abilities to provide basic infrastructure such as water connections and paved roads to the city. Despite the fact that Rawabi has been under construction since 2010, only about a quarter of the city has been constructed.

According to the Washington Post, Masri said that Rawabi was at one point about to receive $120 million for apartments that were sold, but 452 of the 639 apartment buyers canceled their purchases when Israel refused to provide the necessary water connections. It was only by appealing to sympathetic politicians in the US, Europe, and the UN that Masri was able to pressure Israeli Prime Minister Benjamin Netanyahu to supply water to Rawabi.

This leads to obvious questions. How can a city such as Rawabi prosper when it can barely even guarantee access to water and roads? Why would any domestic or foreign party invest in a city that is in such a precarious situation, where Israel can dictate at a whim what its short or long-term success will be? The reality is that Rawabi will never succeed, nor will it attract serious investors while it remains under the tight grip of Israeli occupation.

Rawabi’s aim is to be home for about 40,000 Palestinians, but since 2015, only around 5,000 people have moved into its apartments. In stark contrast, Israel’s largest settlement in the West Bank, Modi’in Illit, has a population of at least 73,000. Three other Israeli settlements in the Palestinian territories are Ariel, Beitar Illit, and Ma’ale Adumim, and they have a combined population of around 115,000 settlers. In just four settlements, almost 200,000 Israeli settlers live comfortably, yet illegally, on stolen Palestinian land. 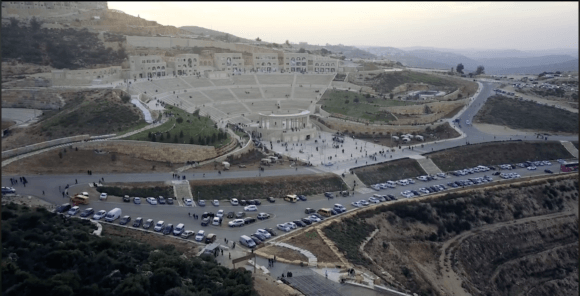 Screen shot from a promotional film for the West Bank city of Rawabi. (Photo: Facebook)

Israel also maintains full control of “security” and land management in “Area C” of the West Bank, which, uncoincidentally, contains the majority of land that is suitable for agriculture and farming.

Israel controls all entry and exit points, and Palestinians cannot go in or out without Israeli permission. But even within the West Bank, travel is restricted. As of January 2017, there were at least 98 permanent checkpoints, and according to the UN, there were an average of 327 flying checkpoints (temporary, random checkpoints) per month for nine months in 2017, in flagrant violation of international law concerning the freedom of movement.

As a result, travel between different points in the West Bank can take 10 times longer than normal. Medical patients in the West Bank have even died as a result of these restrictions; in just one example in 2015, a 65 year-old Palestinian women with respiratory problems died due to road closures that prevented her from reaching a hospital in time. These are just a few examples of the ways in which Israel control’s even the most basic aspects of daily lives for Palestinians, and these alone are crippling to the livelihood and growth of Palestinian society.

These are some of the reasons why Rawabi has come under intense criticism from Palestinians. Many see Rawabi as an unrealistic pipe dream that places profits above Palestinian rights and freedom. The project has also been criticized for significantly engaging and collaborating with Israel and Israeli companies. For example, about 85 percent of the cement came from an Israeli company, and other Israeli companies contributed to Rawabi’s construction. The Boycott, Divestment, and Sanctions (BDS) movement also condemned Rawabi as a project that normalizes Israeli occupation rather than resist it. 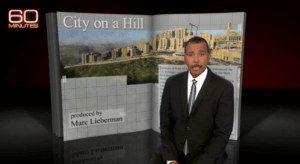 While the “60 Minutes” report on Rawabi may or may not have intended to serve as propaganda in favor of Israel, it unfortunately promotes the idea of normalization with Israel, particularly now that the US decided to withdraw from its position that Israeli settlements (and by implication, Israeli occupation), are not illegal under international law.

“60 Minutes” attempts to push the idea of co-existence without highlighting the devastating effects of Israeli occupation and oppression. The program quotes Eyal Waldman, an Israeli businessman who opened an office in Rawabi and said that, “I think it’s time to do peace. It’s enough killing each other for 70 years.” Ironically, he also said that he would kill Palestinians who threaten “what’s important” to him. This is indicative of the imbalance of power and the high level of impunity that Israelis enjoy over Palestinians.

Masri says that “We can continue the atrocities for the next 1,000 years or we can take a shortcut and start working together and end this misery.” But there is no such shortcut. Palestinians need liberation and every single one of their basic human rights before they can even begin to consider working with Israelis.

The report basically suggests that even though Palestinians live under the rule of Israeli occupation, they can still prosper and succeed with cities like Rawabi. Yet in the same report, “60 Minutes” mentions that Rawabi is the “biggest construction project in modern Palestinian history and the first planned city for Palestinians in more than 1,000 years.”

But if that is true, “60 Minutes” (and other media outlets throughout the world) should ask why it has taken so long for such a large project and such a city to be developed. The answer to this question is that Israeli occupation is by far the most negative factor contributing to the economic and developmental stagnation in Palestine. When the occupation disappears, Palestinians will thrive.

Farewell to a friend of Palestine

“This is not a peace agreement but rather an accord to join forces to suppress struggles for freedom.”

It is time to brand ‘Israel’ as an apartheid state