Bennett attempts to silence anyone who dares work alongside Palestinians to end the occupation. – In Palestine Today

Defense Minister Naftali Bennett announced Saturday night that he had issued administrative restraining orders against 30 Israeli left-wing and anarchist activists, barring them entry to the West Bank in order to stop them from joining the weekly, Palestinian-led protests against the separation barrier and the settlements.

The order included the name Israeli activist Jonathan Pollak, who is already in detention after a far-right wing group filed a private prosecution against him for participation in West Bank demonstrations against the occupation. Pollak, who refuses to recognize legitimacy of the Israeli legal system, has been in custody for 15 days.

Bennett’s announcement feels like it may have been relevant in 2005 when members of Anarchists Against the Wall would regularly join Palestinians in the West Bank. But the Palestinian popular struggle, which began with the building of the wall in 2002, and included demonstrations, marches, and direct actions, has reached a nadir over the past years.

Whether it is because Israel completed the building of the barrier, activist fatigue, or violent suppression of the protests — which included arrests, injuries, and even deaths — the demonstrations have never been smaller. In the past, hundreds of Palestinian, Israeli, and international activists would join the weekly protests in numerous sites around the West Bank. Today only symbolic protests take place in the villages of Bil’in and Ni’lin, which usually include no more than 20 people. Nabi Saleh no longer holds protests on a regular basis. Only in the village of Qaddum do between 100-200 people still demonstrate on a weekly basis. 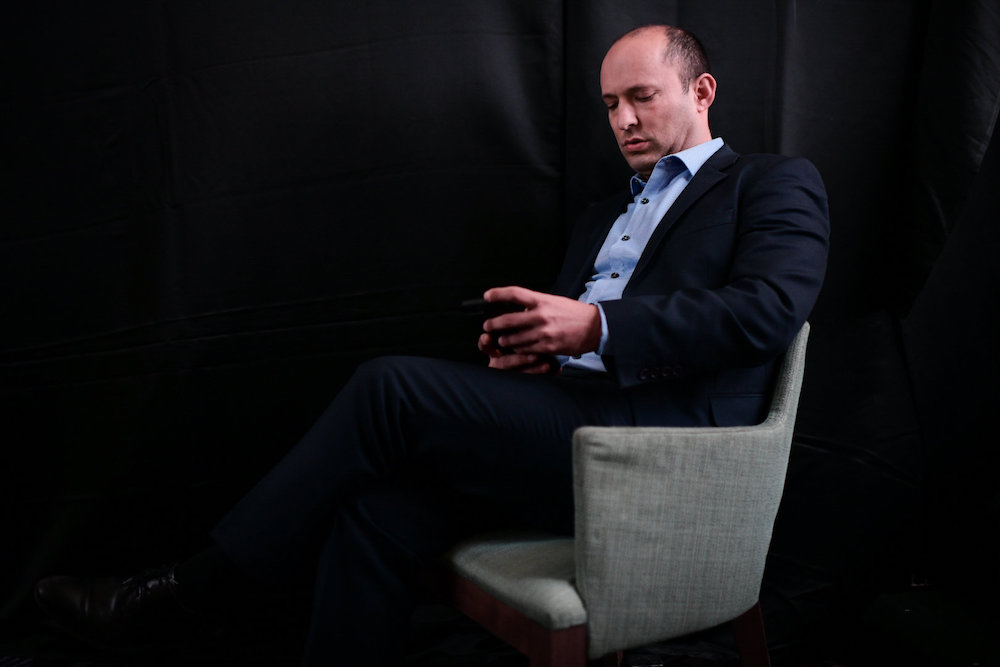 Anarchists Against the Wall was never a formal organization but rather a loosely-defined group of activists whose activism began after being invited to the West Bank village of Mas-ha in 2003 to protest the building of the separation barrier there.

The idea behind the restraining order for Israeli activists is based on the “theory” that Palestinians are helpless and need Israelis to travel from Tel Aviv to their villages in order to teach and encourage them to protest the occupation — the same occupation under which they live every single day. This assumption, of course, is not only racist, it is entirely disconnected from reality. Palestinians regularly hold protest marches in cities and villages that are unaffiliated with the popular struggle without a single Israeli coming to “encourage” them. Despite what Bennett may think, the Israeli activists do not lead the protests — they come to the West Bank to stand in solidarity.

Without getting into the question of what does or does not constitute “legitimate” resistance, of the hundreds of West Bank demonstrations I have attended and documented over the last 15 years, not a single Israeli participant has ever thrown a stone at soldiers. They have protested, blocked bulldozers, taken part in direct actions, stood in solidarity with their Palestinian friends, and sometimes were even wounded or arrested. Many of them believe in nonviolence, while others believe that it is not their place to use violence when Palestinians will be the ones to pay the price.

Ad Kan, the extreme right-wing group that filed the private prosecution against Pollak and two other Israeli activists, never actually claimed that the three threw stones, but rather that they “assaulted” Israeli security forces by the very fact of their presence. So how did the notion that anarchists throw stones become so pervasive among the Israeli right? Simple: because it’s a lie that has been repeated ad nauseam for years. 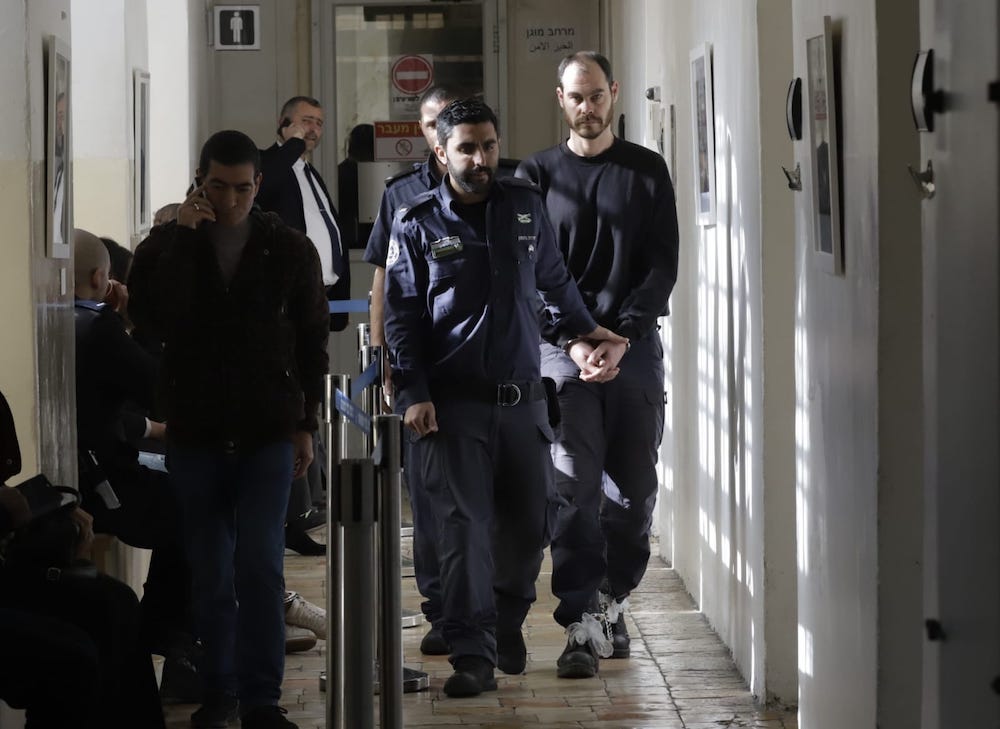 Jonathan Pollak is led to the Jerusalem Magistrate’s Court for a hearing, January 15, 2020. (Oren Ziv)

The fact that an arrest warrant had been issued for Pollak, yet he continued to participate in demonstrations for over half a year (despite Ad Kan’s futile attempts to alert the Israeli security services to his presence there) reflects the level of interest that the defense establishment has shown in  the participation of Israelis at West Bank demonstrations in recent years.

Furthermore, Bennett’s announcement compared the restraining orders against anarchist activists with those previously issued to hilltop youth, the young violent settlers of the West Bank, who were suspected of committing hate crimes. That comparison is baseless. While settlers are hardly ever put on trial for violence against Palestinians (or even Israeli soldiers), there have been hundreds of indictments against Israelis who have attended Palestinian protests in the West Bank.

In his announcement, Bennett further stated that until the administrative orders go into effect, he has demanded security forces on the ground to “act firmly against this activity.” And while the protests today hardly reach a point of confrontation with the soldiers, those who have been following the popular struggle know that the army does, in fact, act firmly against nonviolent demonstrators once those demonstrations grow large enough.

Suffice it to say, that same force is used against all Palestinian protests, which are considered illegal under Israeli military law. This includes firing tear gas, rubber bullets, and live fire. In Bil’in, Ni’ilin, Qaddum, and Nabi Saleh — the four villages named by the defense minister in his announcement — that firmness has led to the death of at least 10 protesters, and the wounding of thousands of others. 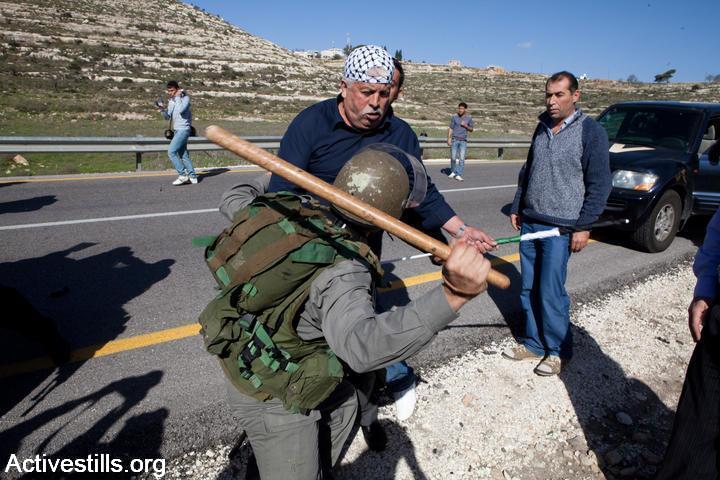 An Israeli Border Police officer beats a Palestinian protester with a club during a demonstration in Nabi Saleh, January 15, 2010. (Yotam Ronen/Activestills.org)

These organizations help persecute the so-called “enemies within,” as Bennett wrote in his announcement. And the price of this incitement is already being paid by Pollak — not only in his indefinite detention, but also when he was attacked by two assailants with a knife outside the Haaretz building, where he works, last summer.

Like many declarations made around election time, Bennett’s restraining orders may turn out to be nothing more than election spin that will have little effect on the reality on the ground (after all, only the Shin Bet and the IDF can issue administrative orders). Regardless, it is yet another step intended to silence anyone who dares act against the occupation, and especially those who work alongside Palestinians. One can only hope that politicians on the Jewish left, human rights workers, and activists who don’t regularly attend protests in the West Bank will have the courage to stand alongside the few who do. To let them know that they are not alone.

Palestine Museum US has given ample space to Palestinian women artists

Young Palestinian engineer discusses Palestine through a ‘then and now’ approach in the social media era.