Israeli settlers control roads serving Palestinians and block their access to it. – In Palestine Today

On Jan. 28, the day U.S. President Donald Trump published the “Deal of the Century,” a woman sat in a rental car in the settlement of Kedumim tapping away on her phone, as shots rang out from next-door Kufr Qaddum. The grunts of army vehicles could also heard emerging from the Palestinian village, which lies a few hundred meters west of the settlement.

The woman continued her drive south, toward Kedumim’s main exit, and I continued west down Nahlah Street. Across the street, I saw an elementary school pupil walk home, and a settler council service car pass by. A routine day in the settlement.

After a short while, I arrived at Kedumim’s westernmost house, which is nestled alongside Kufr Qaddum’s olive groves. It is likely that this point will soon become another marker of Israel’s international borders, if Trump’s plan is implemented and Israel annexes the settlements.

Kedumim was established in 1975 following the infamous “Sebastia compromise,” in which the settlers of Gush Emunim reached an agreement with then-Prime Minister Yitzhak Rabin and Defense Minister Shimon Peres to found a new settlement in compensation for being moved away from the land they had taken over at Sebastia train station, adjacent to a Palestinian village of the same name in the northern West Bank. Many years before that, though, Nahlah Street was the road used by Kufr Qaddum’s Palestinian residents to access Nablus, their nearest major city.

But a 2-kilometer stretch of that road winds between the olive trees and fields of eastern Kufr Qaddum, upon which Kedumim was established 45 years ago. And for the past two decades, that route has been closed to the Palestinian residents of Kufr Qaddum. While the popular struggle has mostly subsided throughout the occupied West Bank, the village is one of the last places to see almost weekly Friday demonstrations, protesting against the road’s closure.

Kufr Qaddum is far from the only Palestinian community in the West Bank to have one of its access points cut off by expanding settlements. The Kiryat Sefer settlement, for example, has swallowed up the Bil’in-Safa road. The Maale Adumim settlement has taken over the Abu Dis-Old Jericho route. And the Neve Daniel settlement has engulfed a local road that connected several Palestinian villages to Maqam Nabi Daniel.

In addition, most of the areas the army has allocated to the settlements are cobbled together from enclaves and non-contiguous territories, including agricultural fields, which the Israeli authorities recognize as private Palestinian land. As such, these areas could not officially fall under the jurisdiction of the settlements to begin with.

This may seem bizarre to anyone who thinks about community planning in conventional terms — as a place where normal people want to lead normative lives that don’t involve property theft. But the West Bank is not a normal place, and the land allocation and planning system Israel imposed on the area operates according to a supreme organizing principle: steal and plunder at your leisure and then have a think about what to do with the booty.

Furthermore, there is only a random statistical connection between the settlements’ official and actual areas of jurisdiction. The reason is that the settlers essentially do as they please, and the authorities responsible for enforcing the law do not do so. This is what happened with Kedumim: the cumulative area of the seven allotted enclaves and non-contiguous areas is 3,300 dunams, while the settlers claim the community sits on around 6,000 dunams. So where did the extra 2,700 dunams come from?

Kedumim today sits entirely on Kufr Qaddum’s land, which the army “donated” to the settlers on behalf of the Palestinian residents. It began with the Israeli army issuing a series of “temporary military seizure orders for security needs” between 1970 and 1978, expropriating over 450 dunams of land, of which over half was given to the settlers. 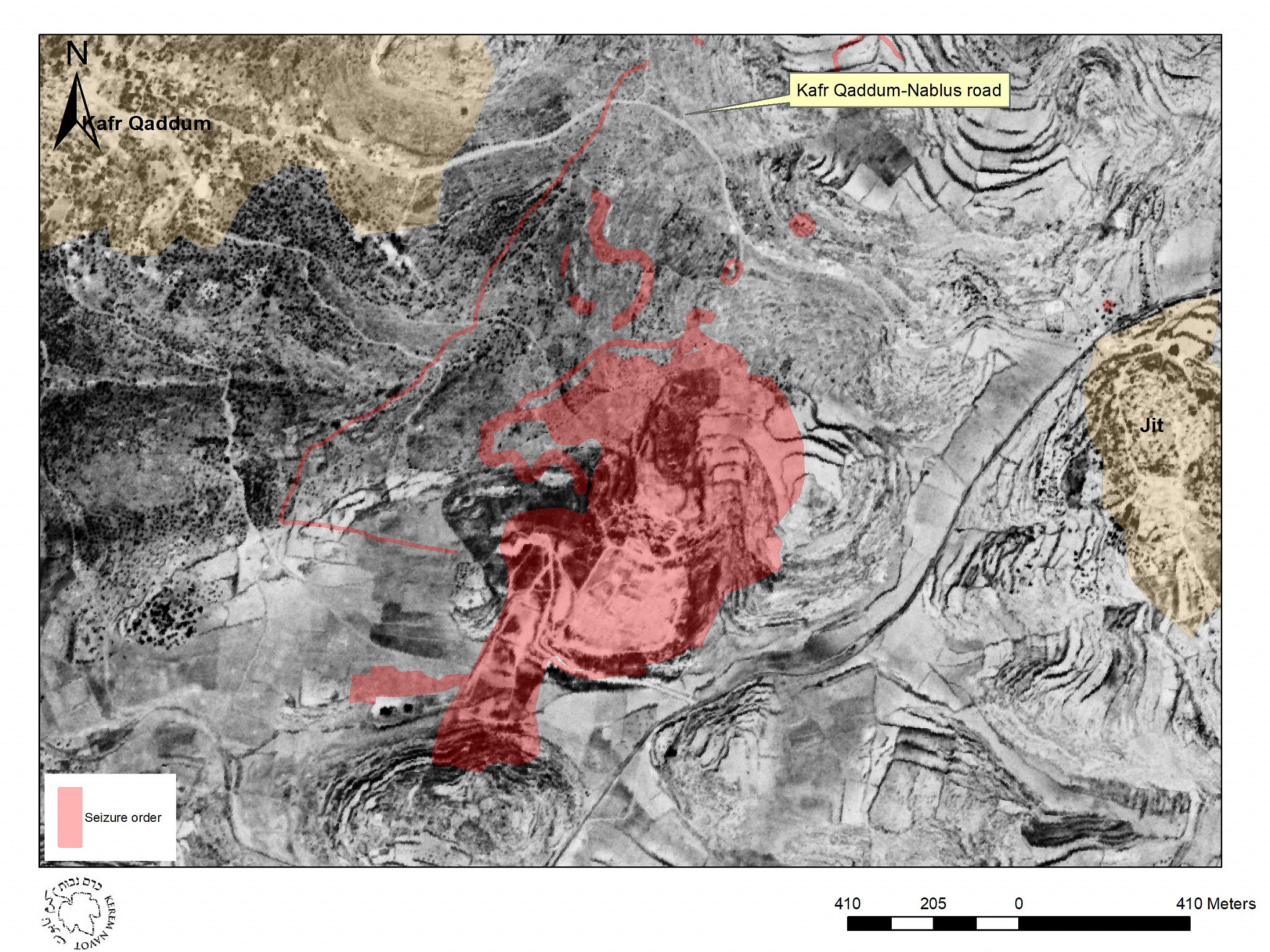 Aerial photographs taken in 1970 show the area captured that year. In the southern part lies the IDF’s Kadum military base, in the same spot where a Jordanian military base had stood until 1967. The northern area became, over the years, the starting point for the Kedumim settlement and the adjacent small industrial zone. To the north of the settlement, the road connecting Kufr Qaddum to Nablus can be seen clearly.

In 1979, in the Alon Moreh Petition, Israel’s High Court ruled that it was illegal to turn over Palestinian land appropriated by the Israeli army allegedly for military use for settlement construction. Soon after, Israel began declaring large swaths of land around the seizure order, which belong to Kufr Qaddum’s residents, as “state lands,” to expand the settlements. 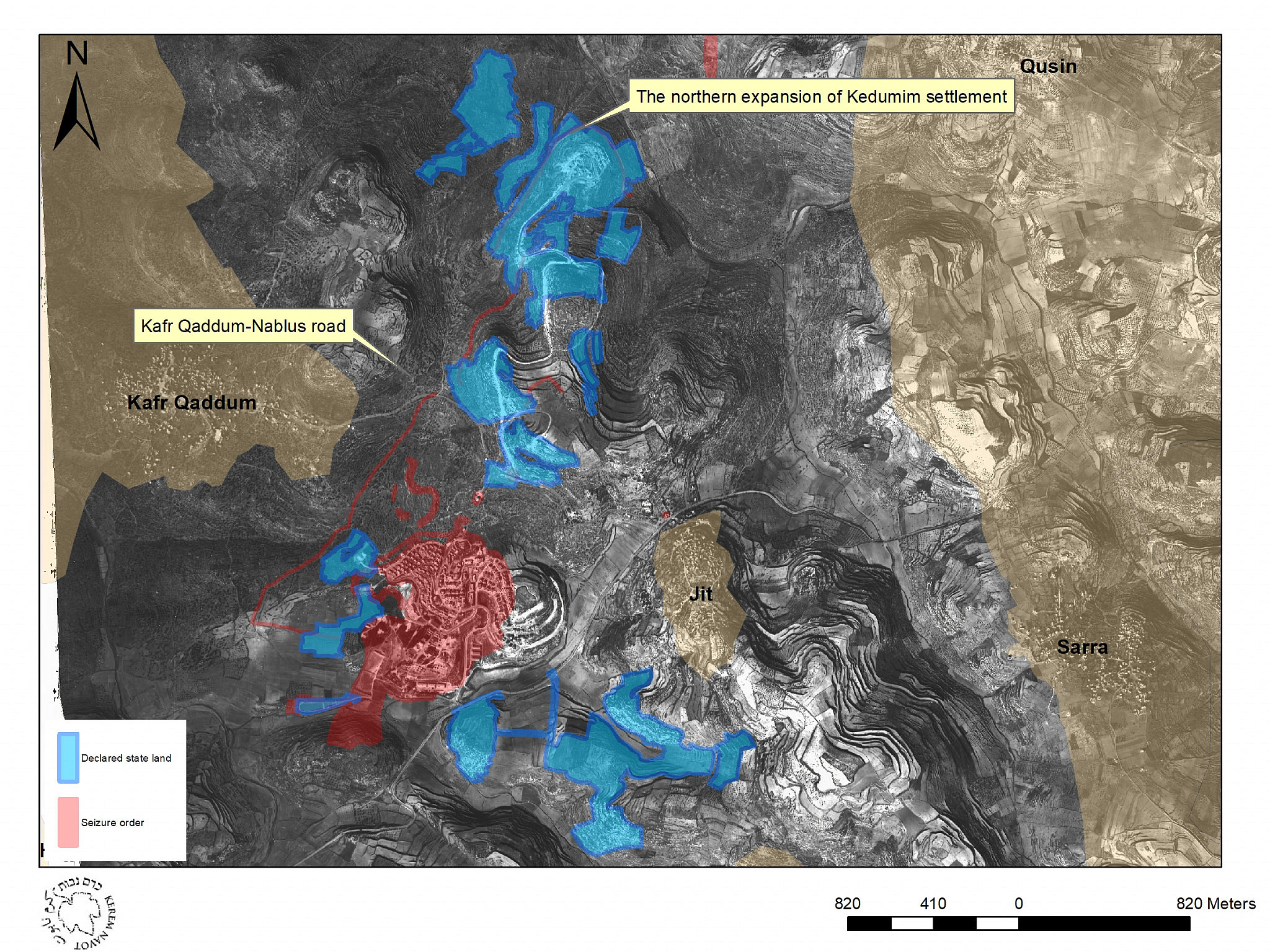 Aerial images from 1983 clearly show that “state lands” handed to settlers were not adjacent to the settlement’s core, because there were — and still are — olive groves owned by the residents of Kufr Qaddum in those spaces. The Palestinian residents can only access some their groves on numbered and designated days each year, while most of these lands remain entirely inaccessible. Already in the early ’80s, Kedumim grew to the point where the edges of the settlement were 2 kilometers (1.24 miles) north of its core. 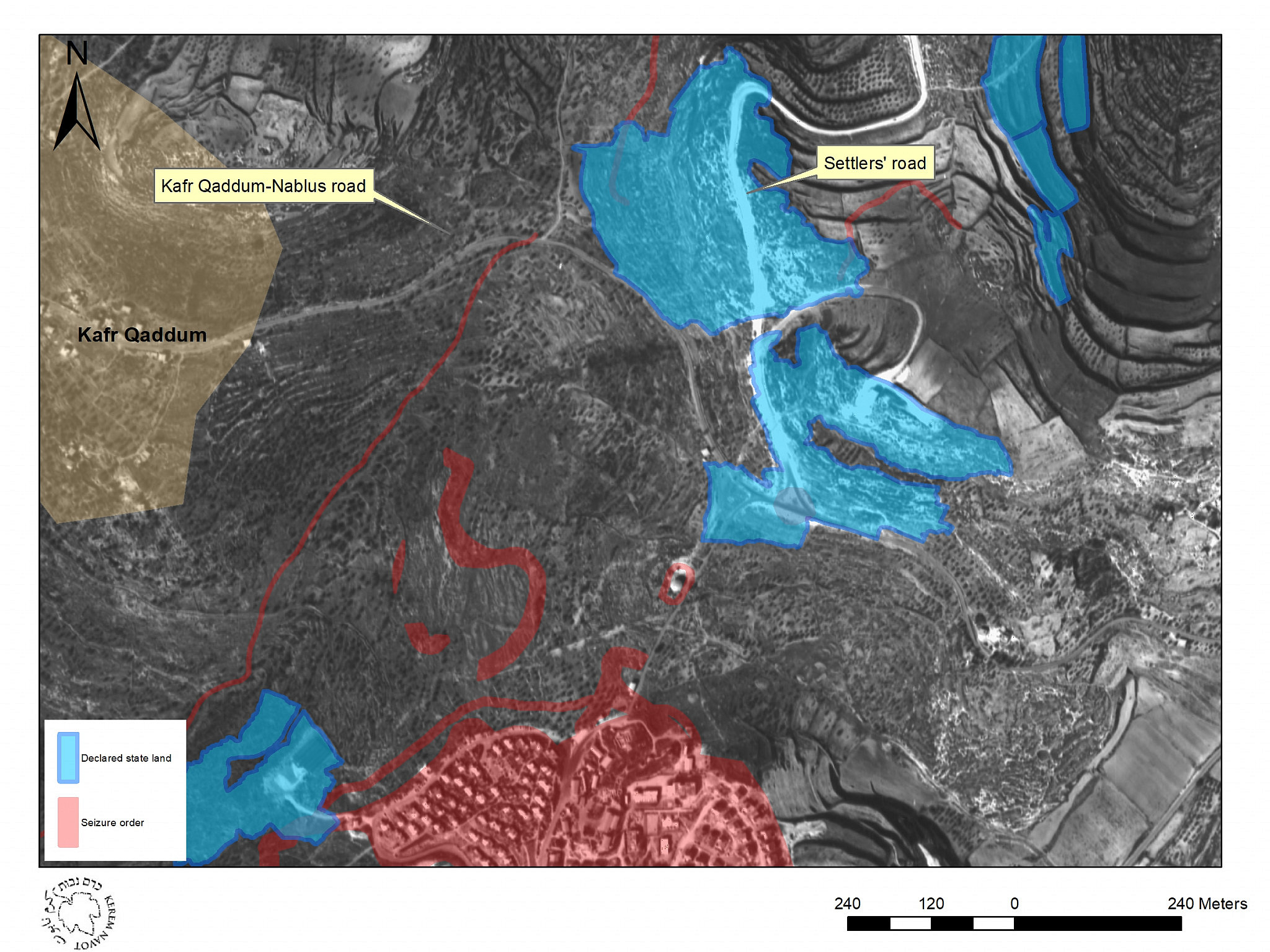 As the 2019 aerial photos show, this is the northernmost point that Kedumim has reached, even four decades after its establishment. The buildings that have been constructed since lie predominantly within the southern and northern boundaries of the settlement.

So, how are these disjointed clusters made to form one, contiguous settlement in the West Bank? According to Daniella Weiss, settler leader and former Kedumim mayor, you simply build a road that goes through Kufr Qaddum’s olive groves. A closer study of an aerial photo from 1983 shows that a road from the southern cluster, which is within the seizure order, protrudes into the northern part, toward the Kufr Qaddum-Nablus road. 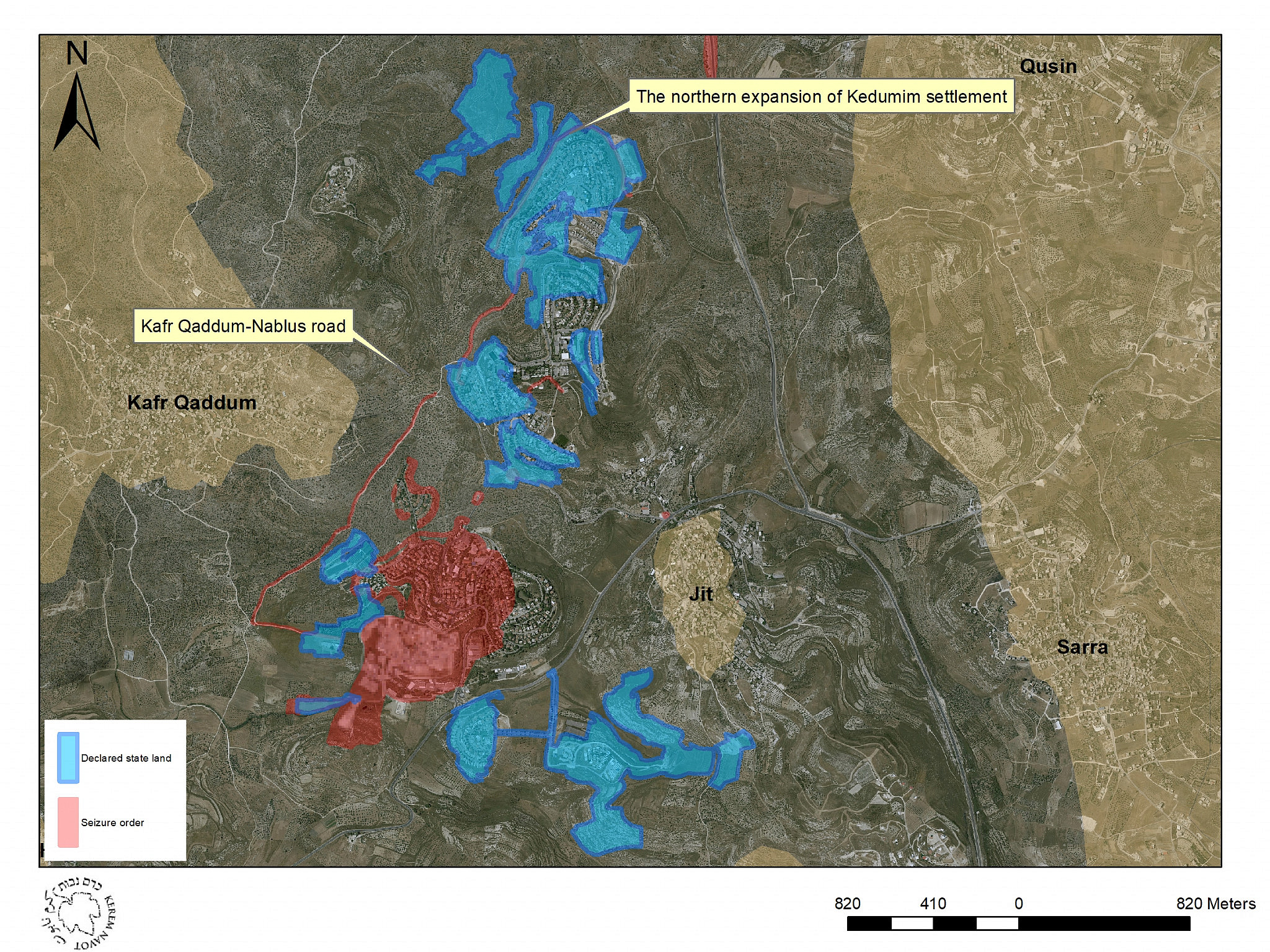 The settlement’s expansion north was the final blow for the Kufr Qaddum-Nablus road. Over the years, as Kedumim expanded and spread over more than 10 hilltops, the road became instrumental for the settlement’s growth, and all the settlers had to do was wait for an opportunity to block Palestinian traffic on it.

This opportunity manifested in the early years of the Second Intifada, which caught the Kedumim settlers in the middle of an aggressive takeover campaign they had started a few years prior. This campaign to control more land around the settlement included the usual motions for settlements of this sort: creating new roads, violently blocking access to areas around the settlement, and constructing outposts.

This is how, by the end of the ’90s, Kufr Qaddum’s Mount Mohammad became the “Har Hemed” outpost. And this is how the neighborhood in which far-right lawmaker and Transportation Minister Betzalel Smotrich now lives was built, in 2004.

Marriage has become increasingly just a dream for young men in Gaza.