When the denial bubble bursts: an Israeli kibbutz faces the Nakba – In Palestine Today

What happens when a people are confined to a bubble where the “truth” has one book to read, to follow and obey, then suddenly the bubble bursts and the sun shines on a whole new truth, verifiable, clear, and sound?

This what happens to the kibbutzim in Nirim, Nir Oz, Magen and Ein Hashloshla.  These four kibbutzim were established after the Nakba of 1948 on my land, Al Ma’in, (65,000 dunums — 16,000 acres). Al Ma’in was and is the home of my Abu Sitta family for centuries, now refugees in the Gaza Strip and elsewhere.

The one who burst the bubble was Eitan Bronstein Aparicio, founder of De-Colonizer (previously founder of Zochrot, an Israel-Palestinian group that educates Israelis about the Nakba). Eitan set up a simple and modest exhibit. He collected maps, books, videos, and an RAF aerial photo of Al Ma’in in 1945, showing fields and features of the village and curated them in two rooms and a courtyard. The exhibit was held on July 25, 2019 in ‘The White House’, a lone Palestinian house which survived the Israeli demolition of the village in 1948 and was converted to a gallery by Haim Peri, a Nir Oz artist.

Eitan invited the settlers in Al Ma’in and neighboring areas to come and see the exhibit. His message was simple. These were the people who lived here and are now refugees two kilometers away behind the barbed wire in the Gaza Strip. The presentation implied that Israel took their property and now you live in it.

Although the number of visitors was modest, probably four or five dozen, the responses were indicative of those who have been denied access to the truth, the victims of silencing Al Nakba.

The angriest comments. and indeed threats, came from an old Kibbutznik, over 80, who witnessed and participated in the attack on Al Ma’in. The Haganah militia attacked Al Ma’in on May 14, 1948 in 24 armored vehicles, destroyed and burned homes, demolished the school that was built in 1920, blew up the motorized well and the flour mill. They were resisted bravely for several hours by 15 Palestinian defenders armed by old rifles. As a child, I witnessed the smoldering remains of my village while I was huddled with other children and women in a nearby ravine. I never saw a Jew before and did not know who the attackers were or why they came to destroy our life.

On the fourteenth of May 1948, I became a refugee.

On that day Ben Gurion declared the state of Israel on the ruins of my country Palestine.

Following the attack and occupation, the four kibbutzim were built on Al Ma’in land in the period 1949 to 1955. The Abu Sitta family who were then about 1000, and now about 10,000, became refugees mostly in the Gaza Strip.

The old settlers, who were present in 1948, accused Eitan with sedition and suggested he find another country to immigrate to. They threatened to tell the authorities to deny entry to foreign visitors who may come especially to see the exhibit. Ironically, these elders were the first to visit the exhibit, probably to find how to explain their story of denial.

Their story of course does not deserve rebuttal. They said there were no people there. ‘We came to an empty desert’. How could they explain the fields in the aerial photo? Who planted them? The exhibit house, the motorized well and its flour mill, the remains of which are still there, how could they explain those?

The oldest settler from Nirim, Solo (aka Chaim Shilo or Solo Weicheck), 94, a German of Russian extraction, was indignant when a British journalist asked him repeatedly, why you don’t allow the Abu Sitta family to return home?

The old settlers said these houses were built by the British. This is a strange claim as anyone with rudimentary knowledge of Palestinian history will know we had been fighting the British since Balfour. In particular, my eldest brother Abdullah was the leader of the 1936-1939 Revolt in the southern district. He and his comrades expelled the British from the Beer Sheba district for one year from October 1938 to November 1939.

The old settlers said they bought the land. But none would give any proof they owned a single plot for miles around, legally or otherwise.

The most common response for young and old was: ‘We won the war. Since when has the victor returned what he won?’

To suggest that being strong in winning a war against a weak party is a justification for a crime would relieve Nazi Germany from their crimes because they could and did these crimes. Under the same argument, the British would be exonerated from the Amritsar massacre in 1919, the Russians from executing Polish officers in Katyn Forest in 1940, and the French from throwing hundreds of Algerian prisoners into the sea by helicopter death flights in 1957.

The settlers repeated the same old mantra, ‘We accepted the Partition Plan, you did not. Would it be possible for France to give more than half of the country to African immigrants?’

Had the settlers been informed, they would know that the Partition Plan was a mere recommendation, had no binding legal value. The UN had no authority to divide countries and said so. Moreover, the UN, and surprisingly the U.S., abandoned the Partition Plan in favor of UN Trusteeship over Palestine.

Not one Israeli source mentions that. The poor settlers would be the last to know.

The settlers claimed that, ‘If you did not wage a war against us, there would be peace between us.’ This is very odd. I do not recall that my family or any group of Palestinians deployed an army and marched to Poland and Russia to attack the Jews there. The reverse was true. Who then waged the war? They did not know the answer.

What they certainly do not know is that the abandonment of the Partition Plan in mid-March 1948 triggered a major event in the history of the Nakba. Ben Gurion decided to conquer Palestine and ordered Plan Dalet to be implemented at once.

Thus started the Zionist invasion of Palestine. In six weeks from first of April to 14 of May 1948, the Haganah conquered critical locations in Palestine and established Israel on the ground, after Herbert Samuel (1920- 1925) laid its legal foundation 28 years earlier.

In these six weeks, 220 villages including most cities were attacked and depopulated, almost half of all Palestinian refugees were expelled, and 22 massacres out of 50 that took place over the course of the Nakba were committed. During those same six weeks 17 military operations were carried out by nine brigades. In any attack there were superiority of numbers up to 1:10 against the defenders. In total, Israel mounted 31 military operations to occupy several regions of Palestine thus increasing their control from 6% of Palestine at end of the mandate to 78% by the middle of 1949. New land was occupied to form a solid spine from the mid-coastal plain to Merj bin Amer to western bank of the river Jordan from Beisan to Metulla.

That was the real invasion of Palestine. It was a Zionist invasion.

Enter Adele Raemer, a new settler in Nirim. She came from the Bronx in 1975 to settle on my land. She writes a blog about the suffering of the kibbutzim in the ‘Gaza Enclave’ and laments Palestinian kites burning ‘her’ wheat fields. I responded by saying these are my wheat fields. I told her that I remember as a child being allowed to sit on our combine harvester.

She wanted to know: How long did the Abu Sitta family live in Al Ma’in?

I refused to answer. I could have replied that Abu Sitta name was on Allenby maps when he took Beer Sheba in 1917, that my great-great-grandfather was mentioned by name in an 1845 Ottoman document copied in Cairo and Jerusalem. I could have said that the name Abu Sitta (Father of Six) was coined in about 1720 on account of my early ancestor was a well-known knight accompanied by six companions/guards.

I refused to answer because I do not have to prove my heritage to a settler whose relatives came from the shtetel to the shores of Palestine in a smuggler’s ship in the dead of night.

Her lamentations about the hardship of life in Nirim were echoed by her cousin, Gil Troy, a professor of history at McGill University. His academic background did not save him from the confines of the denial bubble.  He writes, in response to the devastating Israeli attack on Gaza in August 2014, that Nirim was established in 1946, that is before the Nakba. Wrong. It was established on my land in the spring of 1949 after we were attacked and expelled. He admired the “true farming community” but omitted to mention it was established on a stolen property, and the owners are watching them behind the barbed wire two kilometers away. He praises the settlers as “farmers who even under fire continue reaching out to their Gazan neighbors, confuse the world with their remarkable Jewish, Zionist and democratic generosity”.

Nirim itself has 173 members and their families exploiting 20,000 donums (5,000 acres) of my land while my Abu Sitta extended family are 10,000 refugees living two kilometers away.

The learned professor talks about Israel’s “border”. He should have known that Israel never had a border neither by its own admission nor in international law. He was probably referring to the line of the Armistice Agreement February 24, 1949. But the second article of this Agreement states that it does not grant rights to Israel, neither to its sovereignty nor to ownership of occupied land.

No doubt the learned professor does not know that the border he speaks of is only a ‘modus vivendi’ temporary line agreed to in February 1950. The real Armistice Line is three kilometers inside the land occupied by Israel in 1948, which makes Nirim, Ein Hashlosha, and Nir Oz falling in un-occupied Palestine, now called the Gaza Strip. 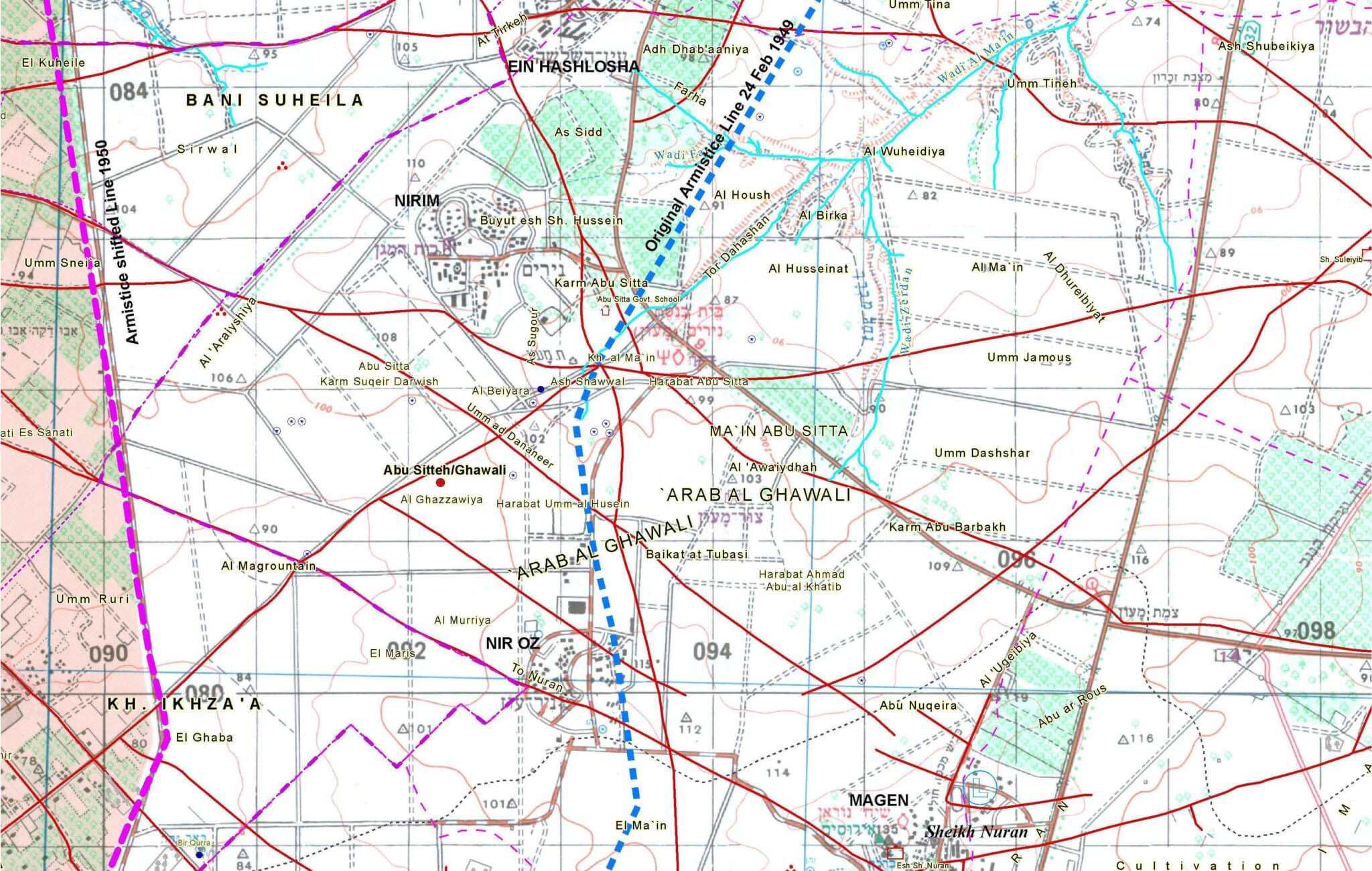 This thought alone would terrify the settlers and transform Eitan’s exhibit into a bombshell of facts which undermines all their claims. But it was not mentioned.

Curiously absent from all conversation is the horrendous rape and murder of a 12 year old Arab girl captured by a Nirim platoon in August 1949. The platoon soldiers took turns to rape the girl, then they shot and buried her. Only her hand sticking out of the shallow grave remained a sign. Ben Gurion mentioned it briefly in his war diary. Not one mentioned this crime, not even the older settlers, like Solo, who were there at the time.

But there is a ray of hope, a ray so tiny as to expose the volume of denial. This is a response from Efrat Katz, a settler in Nir Oz. It is worth quoting in full:

What I’ve seen here today was very moving and even painful. In spite of living here more than 35 years I feel the need and the hope to return to the land and revive it with the past emotions, to revive it with the culture and habits of yours, the residents.

A land is not a brick. A land is a value, it is roots, it is a love of a place. There’s no room for deportation. My heart is with you.

It may appear to settlers that the bubble of denial is a safe place to hide. The logic is clear.  If a crime is exposed, the perpetrator would be a criminal due for punishment and remedy. Eitan’s exhibit is a clear reminder.

But now there is not much space left in the denial bubble to hide. When the whole world knows about the crime, justice will catch up with them and the remedy will be too heavy a price to pay.

Israeli politics depend on how dangerous its policies are

Why Palestinians aren’t surprised by the humiliation of Rashida Tlaib