Israel’s annexation of parts of the occupied West Bank has been fiercely criticised by not only Palestinians but by the international community at large.

The plan, which aims to annex all illegal Jewish settlements in the occupied West Bank – including the strategic Jordan Valley – amounts to one-third of the territory and is in line with US President Donald Trump’s so-called “Middle East plan,” which envisages a demilitarised Palestinian state on a patchwork of disjointed parts of the Palestinian territories.

The Israeli annexation was slated for July 1, but Israeli officials said the process would take place later this month in coordination with their American counterparts.

“Coordination with the American administration is not something that can be dismissed,” Israeli cabinet minister Ofir Akunis told Israel’s Army Radio on Wednesday.

The West Bank, including East Jerusalem, is viewed as occupied territory under international law, thus making all Jewish settlements there – as well as the planned annexation – illegal.

Palestinian officials have threatened to abolish bilateral agreements with Israel if it goes ahead with annexation, which would further undermine a two-state solution.

Several countries, including some of Israel’s staunch allies, have come out with public statements against the annexation.

In an editorial in Israel’s largest selling newspaper on Wednesday, British Prime Minister Boris Johnson called for any annexation plans to be scrapped.

“As a life-long friend, admirer and supporter of Israel, I am fearful that these proposals will fail in their objective of securing Israel’s borders and will be contrary to Israel’s own long-term interests,” Johnson wrote in Yediot Ahronoth.

“Annexation would represent a violation of international law,” he said.

“I profoundly hope that annexation does not go ahead. If it does, the UK will not recognise any changes to the 1967 lines, except those agreed between both parties.”

France’s foreign minister, Jean-Yves Le Drian, told the French parliament “an annexation decision could not be left without consequences”.

He said Paris was “examining different options at a national level and also in coordination with our main European partners”.

The German parliament has called on Israel not to go ahead with the annexation of parts of the West Bank, describing the move as being “in contradiction with international law”.

“Peace cannot be achieved by unilateral steps,” he said. 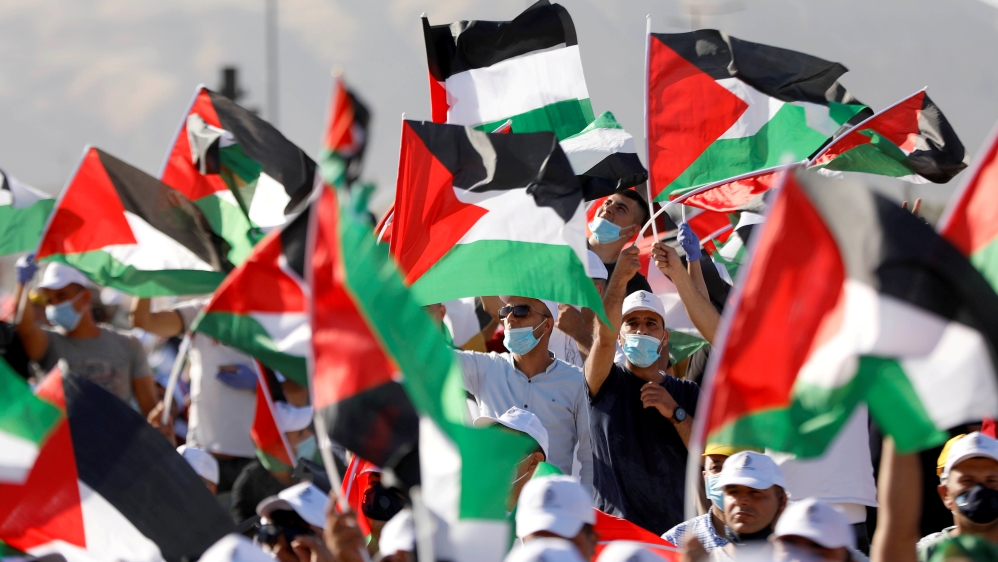 Demonstrators take part in a rally, organised by the Palestinian Liberation Organization (PLO), to protest against Israel’s plan to annex parts of the occupied West Bank, in Jericho [File: Mohamad Torokman/Reuters]

In a rare criticism of Israel, Australia warned against “unilateral annexation or change in status of territory on the West Bank”.

Jordan has warned annexation could trigger a “massive conflict” and has not ruled out reviewing its 1994 peace treaty with Israel.

The Vatican has summoned the US and Israeli envoys over Israel’s annexation plans.

A senior diplomatic source told Reuters that Cardinal Pietro Parolin, the Vatican’s secretary of state and the Vatican’s top diplomat, expressed “the concern of the Holy See regarding possible unilateral actions that may further jeopardise the search for peace between Israelis and Palestinians, as well as the delicate situation in the Middle East”.

Amnesty International’s deputy Middle East chief Saleh Hijazi said: “International law is crystal clear on this matter – annexation is unlawful,” adding if Israel moves forward it “points to the law of the jungle”.

130,000 are jobless in Gaza since the beginning of Coronavirus.

The Story of a Holocaust Survivor

A Message from Peaceful Palestinian to an Israeli Sniper

I’m Palestinian. Like Rashida Tlaib, I Am Barred From Seeing My Family.