Palestinian-Dutch supermodel Bella Hadid has called out Instagram for removing one of her posts, in which she shared a photo of her father’s passport showing his birthplace as Palestine.

The 23-year-old model used her social media platform to proudly show her father Mohamed Hadid’s now-expired US passport, highlighting his birthplace as Palestine.

It is not clear why the platform chose to take down the image, however Hadid later shared a screenshot of the message she received from Instagram, citing violations of community guidelines, including harassment and bullying.

Hadid hit back at the platform, tagging them and asking why her post was taken down.

“What part of me being proud of my father’s birthplace of Palestine is ‘bullying, harassment, graphic, or sexual nudity’? Are we not allowed to be Palestinian on Instagram? This, to me, is bullying,” her post read.

“You can’t erase history by silencing people. It doesn’t work like that,” she added. 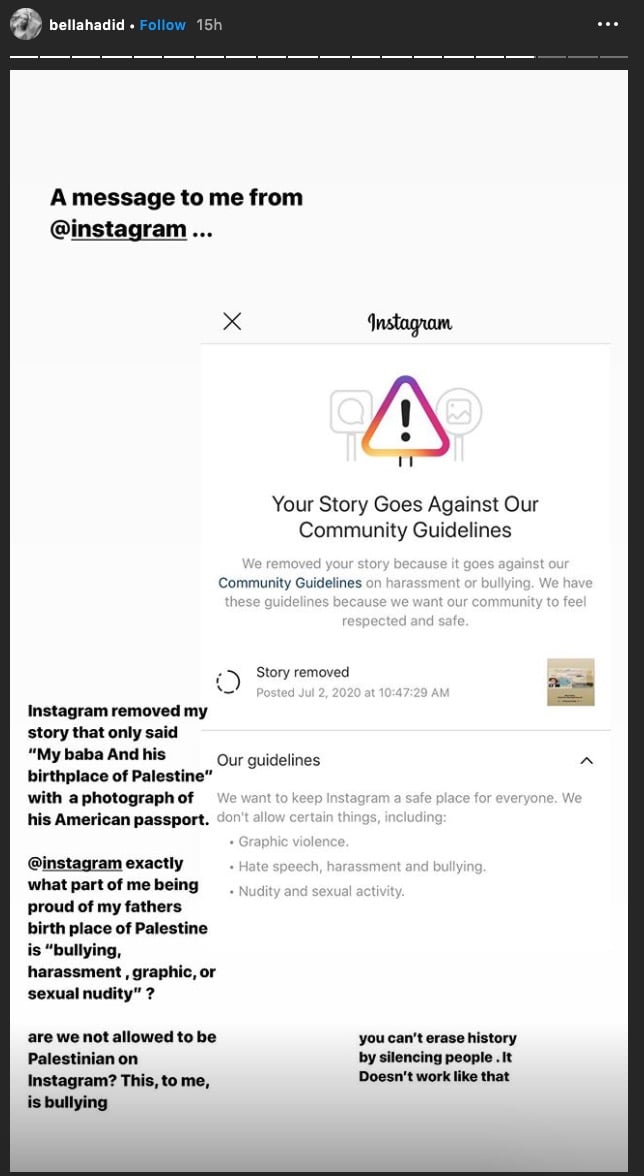 The incident has sparked a broader conversation about social media platforms silencing posts about Palestine.

Many social media users have since reshared Hadid’s photos online, praising the model for speaking up about her heritage.

Hadid has previously spoken about her heritage and her solidarity with Palestinian people. In 2017, the model joined a pro-Palestine protest outside the American embassy in London to oppose US President Donald Trump’s recognition of the whole city of Jerusalem as Israel’s exclusive capital.

She also took to Instagram to convey her thoughts on the matter, at the time, calling the move a major step back for peace.

The model’s older sister, Gigi Hadid, has also used social media to campaign for co-existence and the equal treatment of Palestinians and Israelis.

I’ve said it before and I’ll say it again. For me, this is not about religion or one against the other – it’s about the greed. #FreePalestine #freegaza #coexist ☮️

Like his daughters, Mohamed Hadid, a real estate developer born in 1948 in the town Nazareth now in present-day Israel, regularly uses his Instagram platform to speak on matters related to Palestine, such as the right of return for Palestinians forcibly displaced since 1948, and Palestinian culture, food and heritage.