An LGBTQ+ Pride rally in Israel isn’t political, apparently — until you wave the Palestinian flag. When I did so at Tel Aviv Pride last month, a homonationalist attendee first tried to cover the Palestinian flag with a bigger pride flag he was holding, and ended up violently assaulting activist and lawyer Sapir Sluzker-Amran, who stood up for a woman who was trying to defend me.

Some may question the connection between the LGBTQ+ struggle and the Palestinian flag. Throughout my involvement in LGBTQ+ politics in Israel-Palestine, I have witnessed two attempts by those in power to exploit the LGBTQ+ struggle to further their white supremacist and settler-colonial goals. I recount these events to develop a theory: the rights we gain on the backs of those more marginalized than us are only temporary; broad coalitions of the underprivileged can prevent repressive regimes from going after us next.

In 2010, I was part of a group with the Israeli LGBT Association that asked to hold the first-ever pride event in the city of Be’er Sheva. Mayor Ruvik Danilovich set a condition for the city’s funding of the event: that it be held at the plaza of the Grand Mosque of Be’er Sheva. After expelling the city’s Palestinian residents in 1948, Israel seized control of the mosque, which it used as a prison and later a courthouse before eventually turning it into a museum. The municipality still refuses to restore the mosque as a house of worship for the city’s Muslim residents. When we received the path-breaking message that the city was willing to support our event, the museum director asked us to refrain from holding drag shows, in accordance with an intergovernmental committee’s report that recommended maintaining the dignity of the mosque as a holy place.

We, local activists at the Israeli LGBT Association’s Be’er Sheva branch, maintained that the municipality might be trying to strengthen its claim to the mosque by portraying Muslims as homophobic (based on their assumption that Muslims would protest the staging of the pride event at a mosque), while simultaneously trying to appease homophobic opposition to the event by presenting it as a Jewish endeavor that would further dispossess Muslims. We refused to be exploited in this fashion, and the municipality backed down. Muslim LGBTQ+ people have continued to attend pride events and parades in Be’er Sheva ever since that decision.

On a more personal note, my partner and I have for the past five years been placed on what Israel’s Labor, Social Affairs and Social Services Ministry calls “Waitlist B” for adoption. Israeli law discriminates against us as a same-sex couple and states that only “a man and his wife together” may adopt children. But in 2008, it became possible for same-sex couples to adopt children in cases where no heterosexual couple was willing to adopt a child due to the child’s age or health condition.

In August of last year, then-Minister of Justice Amir Ohana — himself a gay man — published proposed legislation that sought to amend the discrimination against same-sex couples (while leaving discrimination against single parents intact). Under the legislation’s guise of equality, however, Ohana snuck in another amendment that would enable court-ordered adoptions in the event that “a person of the same faith as the adoptee is not found.” 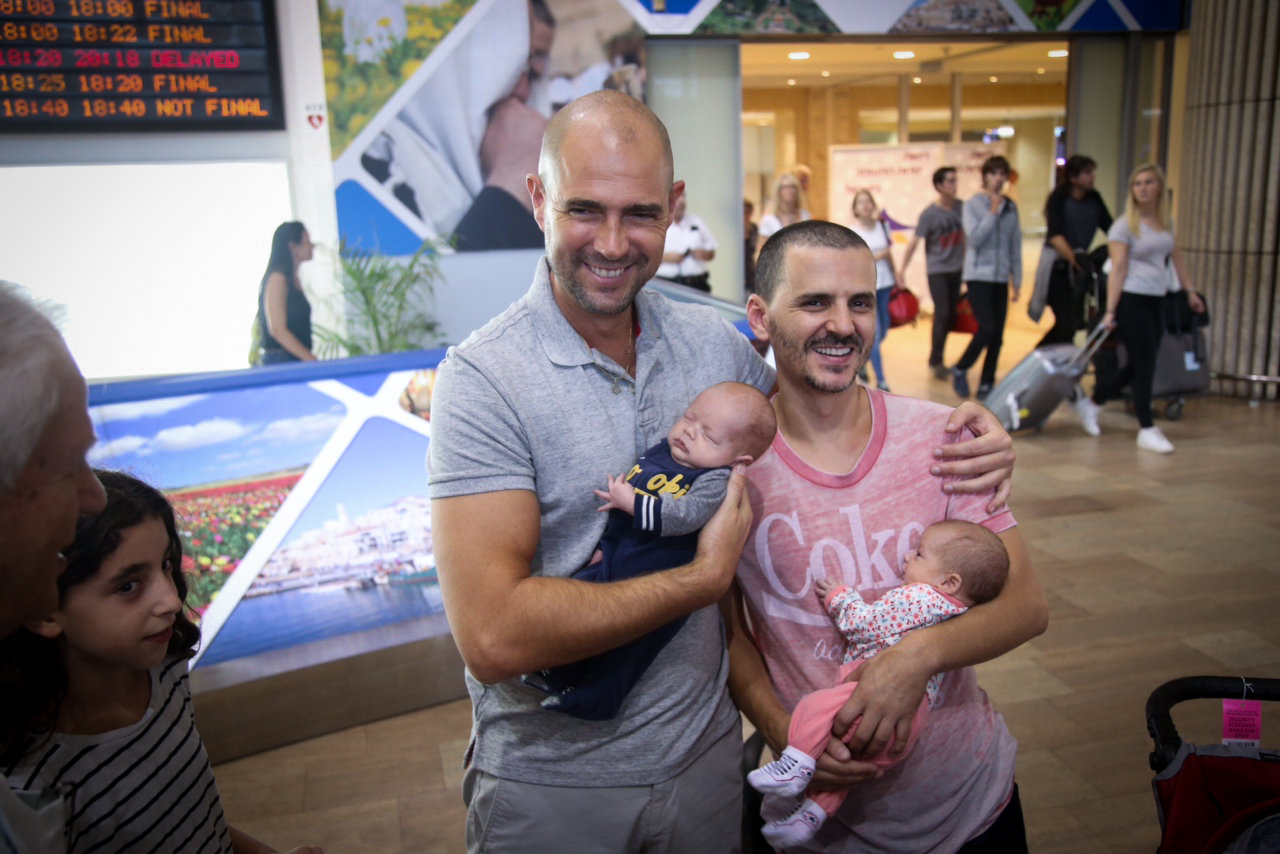 Likud MK Amir Ohana and his partner seen at Ben Gurion International Airport upon their return from the U.S. with their surrogate babies, September 26, 2015. (Flash90)

Israeli law places strict limitations on interfaith adoptions. This logic, according to Professor Michael Karayanni, is influenced by Christians’ abduction of Jewish infants during and following the Holocaust, and the will of the legislator to avoid similar deeds. But Ohana’s proposed amendment would effectively allow for Jewish parents to adopt Muslim children as the demand for adoption in Jewish Israeli society exceeds the number of available children, whereas the trend in the country’s Muslim community is flipped.

The number of children who would be affected by the proposed amendment in the short term is not large: in 2019, only nine Muslim children were adopted. Nevertheless, while partially amending legal discrimination against LGBTQ+ people, the current version of the proposed legislation might harm Palestinian citizens of Israel, in that it would ease the process of removing Palestinian children from their homes even without their parents’ consent. While amendments to Israeli adoption law, including with regard to interfaith adoption, are much needed, those of us struggling against homophobic discrimination do not desire equality at the expense of others.

So why did I raise the Palestinian flag in a pride rally? Not for freedom of expression reserved exclusively for Jews, nor for an over-appreciation of nationalism, and not even for the queer Palestinian youth who waved the flag alongside trans*, bi, and pride flags for the remainder of the rally after the violent assault.

I waved the Palestinian flag as a reminder that some of us refuse the government’s exploitation of the LGBTQ+ struggle to trample others. In place of the coalition currently forming between the privileged segments of our community and the supremacist regime, we ask to imagine other possibilities. 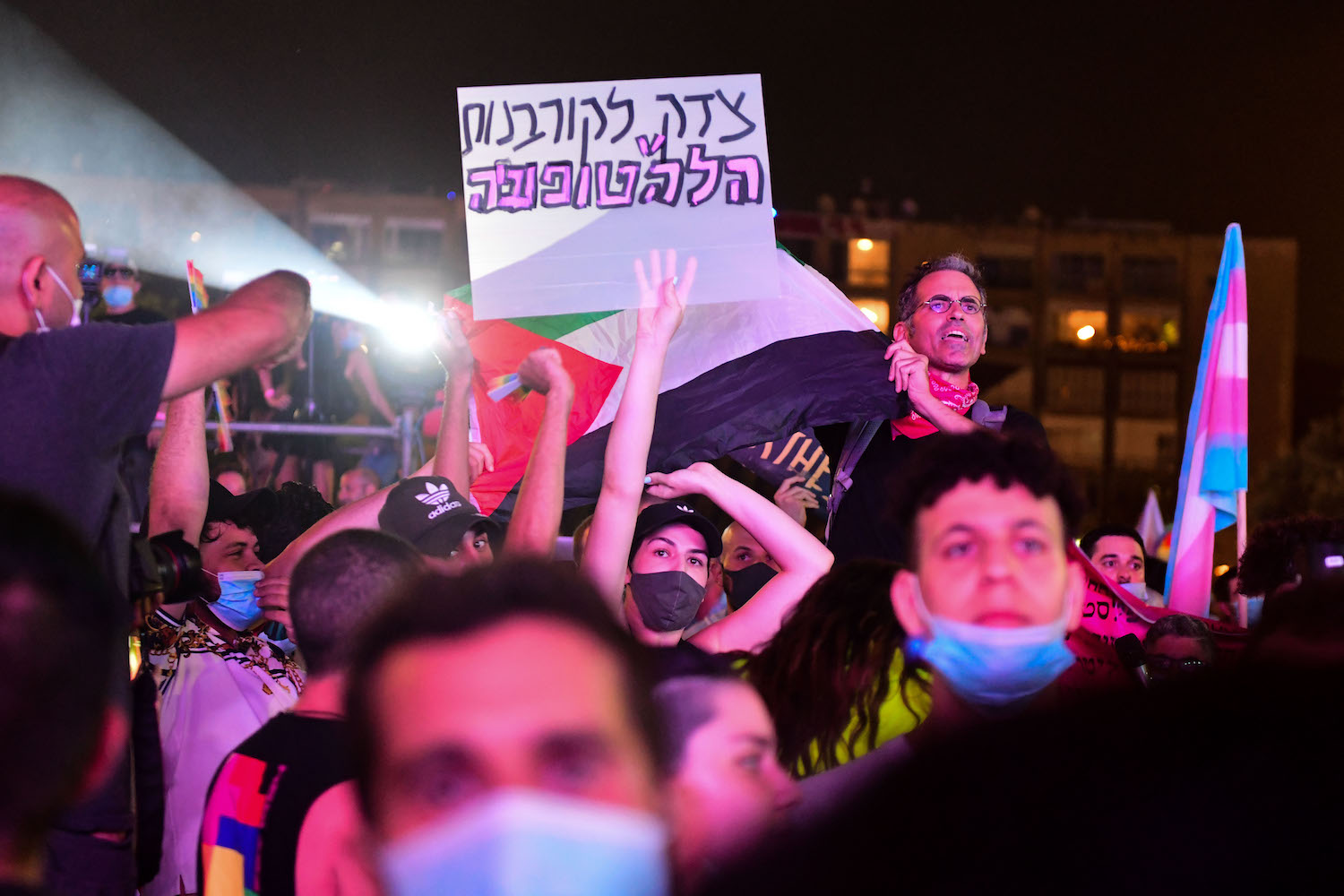 In lieu of making PR videos serving the police, we asked the LGBT liaison in the municipality of Tel Aviv Jaffa, Itai Pinkas, to say the names of some of those murdered by police brutality: Iyad al-Hallaq, Solomon Teka, and Shirel Habura. We asked for a Tel Aviv mayor committed to all, instead of the incumbent Ron Huldai — who once said that “two gays kissing disgust me like cockroaches;” said  “every city needs a rectum” when discussing the LGBTQ+ and Mizrahi neighborhoods surrounding Tel Aviv’s Central Bus Station; and desecrates Jaffa’s al-Is’af Cemetery while neglecting its living inhabitants.

I could not help but think about — silently, because some thoughts cannot be uttered in the city square — the former residents of the Palestinian village Summayl, once located at the junction of Arlozorov and Ibn Gabirol streets, whose story most Israelis would have no way of knowing. The pride rally for equality was held on their land without asking for their consent — while they themselves, whether refugees or internally-displaced, seek to return to that same land.

Mizrahi Jews sent by the Israeli government to inhabit Summayl have been, and continue to be, displaced by Huldai’s wealthy masters. Gay men who used to cruise Independence Park, built on Summayl ’s cemetery, have been chased away as well.

What might happen if, instead of allowing a white supremacist settler-colonial regime to exploit LGBTQ+ people before turning its power against us, we continue to form coalitions with others fighting it? I can already hear the homonationalists taking up arms, but I know that they are wrong. It was not I who brought the Israel-Palestine power relations to the rally — they were under our noses all along.

One of the stories of the Palestinian Nakba