Palestinian farmers living in the occupied Jordan Valley say they are worried about what the future holds with Israel’s impending annexation of the territory, which could begin as early as Wednesday.

Concerns abound the annexation will prevent them from accessing their land and they will be cut off from the rest of the West Bank, destroying their export business and only source of income.

The strategic, and fertile, Jordan Valley is known as the “breadbasket” for Palestinians, constituting half the total agricultural area providing food for Palestinians in the West Bank.

“If annexation goes ahead, it will be a disaster for us farmers in the Jordan Valley,” 52-year-old Muneer Nasasri from the village of Jiffly, 30km (12 miles) south of Jericho, told Al Jazeera.

“We’re tired of the issue of annexation. We’re very scared of what the future could hold. We’re all scared and expecting something to happen on July 1 or July 10 or July 15. What could happen?” Nasasri said.

Israeli Prime Minister Benjamin Netanyahu is expected to begin the annexation of illegal Jewish settlements in the occupied West Bank, including parts of the strategic Jordan Valley, from July 1, fulfilling an election campaign pledge.

The plan to annex as much as one-third of the occupied West Bank was given impetus by US President Donald Trump’s unveiling in late January of his so-called “Middle East plan” as Netanyahu stood by his side.

But details on how Israel plans to proceed with the annexation, as well as the timing, remain unclear.

US officials have said no final decision on the next steps for implementing the Trump plan has been made.

Meanwhile, Israeli military and intelligence officials have warned against the move as it poses a security risk since it could spark an uprising in the West Bank.

‘Need to reclaim our land’

Still, whether the annexation starts on July 1 or later, Palestinian farmers say the move has been expected for a while.

Over the years, they have witnessed Israeli authorities increase evacuation orders and place restrictions on farmers’ access to their fertile land and water.

Because of Israeli restrictions, only 50,000 dunums (12,000 acres) of Palestinian land – one-eighth of the land under Palestinian control suitable for farming – is under cultivation, according to Israeli NGO B’Tselem.

This is why, over the years and with the help of the Palestinian Union of Agricultural Work Committees (UAWC), farmers in the Jordan Valley have organised to resist the move by reclaiming as much of their land as possible.

Funded mostly by donations, the union has helped Palestinian farmers by constructing roads to access their land and deploying heavy machinery to help cultivate land that would otherwise be difficult to level.

According to Fuad Abu Saif, head of UWAC, the organisation has reclaimed about 12,000 dunums (1,200 hectares) of land since 2013 in Area C of the Jordan Valley and West Bank, which remains under Israeli control.

Since 1995, Palestinian farmers have planted some 700,000 productive trees, including almond, olive and grape. 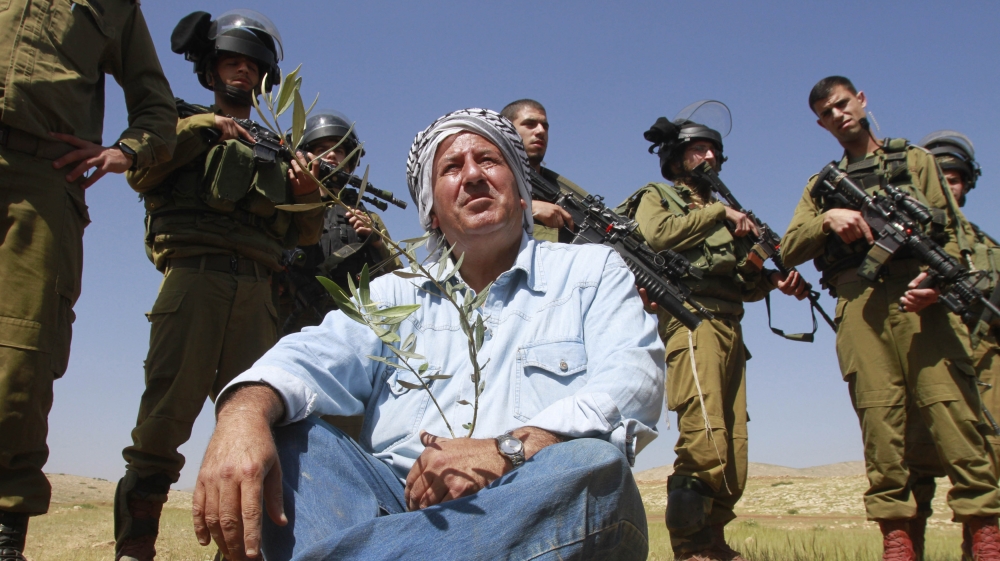 Israeli soldiers stand guard as a Palestinian farmer plants olive trees during a protest against what Palestinians say is land confiscation for illegal Jewish settlements in the Jordan Valley [File: Abed Omar Qusini/Reuters]

With the looming annexation, Abu Saif said their efforts have doubled in the Jordan Valley as empty land becomes easy for Israelis to claim.

“We revisited our plan to focus on the area between Bethlehem and Hebron – and the rest for Jordan Valley,” Abu Saif said.

“We need to change the facts on the ground… we need to have sovereignty over our resources. In the last five, six years [the Israelis] have accelerated their programme of stealing Palestinian land in different ways. We need to reclaim our land … At least we can delay the confiscations.”

‘Lose it for good’

Ibrahim Sawafta, 48, from Bardala, a village in the northern Jordan Valley that is expected to be annexed, told Al Jazeera that Israel has been trying to reduce the number of Palestinians in the area for years.

A piece of land near his home had been closed under Israeli military order since 1967, and local farmers were unable to water it until the union provided equipment four years ago.

In the beginning, the Israelis tried to prevent them, but the farmers took the case to four courts and in the end, succeeded in reclaiming the land, Sawafta said.

Since then, he and 15 other farmers have used the 1,500 acres (600 hectares) to grow watermelon and cantaloupe.

“We have thousands of acres that we haven’t been able to reach. [The Israelis] say we cannot use these lands for security reasons. If they apply the annexation, we will lose it for good,” Sawafta said.

“Annexation means that Israel will have control all over the land. They will apply Israeli law on our lands; we will be at their mercy … We will suffer a lot if annexation happens.”

Life as a Palestinian farmer is already difficult under the current status quo, Sawafta explained.

“If we don’t have water, we will not have a life here,” Sawafta said.

“They want to make life difficult for Palestinian farmers, so they leave. It is a silent transfer because they want this area; it’s a very strategic area for them.”

Abu Saif warned that farmers would lose all ability to sustain a livelihood if annexation proceeds. “Life in the Jordan Valley will be impossible,” he said.

Palestinians living in Area C also live with the threat of home demolitions since they are systematically denied building permits by Israeli authorities.

Palestinian farmers living outside the Jordan Valley are also worried as their land will not be exempt from encroaching annexation.

Hani Hamamdi, from the village of Yata in the South Hebron Hills, told Al Jazeera his land is on the border of the expected annexation area.

Over the years, Israeli authorities uprooted some his family’s crops, including 100 olive trees, claiming the land belonged to the state.

They also demolished the tent the family lives in numerous times – so often that the father eventually dug a cave-like hole in the mountain as a home for the family.

Their cave abode is now also under the threat of demolition.

“I am very, very worried. If we lose the land it’s a big problem; we don’t have any other resource for living,” Hamamdi said.

Americans starve so that Israelis can have mass killing machines!

“The damage to the water tanks is sheer abuse and constitutes an illegal act of collective punishment..”