In mid-June, the Knesset Education, Culture, and Sports Committee held a discussion on the “disappearance and silencing of the Israeli-Palestinian conflict in Israeli textbooks.” The discussion was held following a request by Joint List MK Ofer Cassif, in the wake of a new study by Prof. Avner Ben-Amos of Tel Aviv University entitled “The Occupation in the Israeli Education System: Between Recognition and Denial.”

According to Ben-Amos, and despite what previous studies have shown, Israel’s education system is not ignoring the occupation — it is normalizing it.

The Six-Day War, its consequences, and the internal Israeli discussion on the occupation that has followed, are all somewhat present in high school textbooks. Yet Israeli students learn that the reality of occupation — holding millions of Palestinians under perpetual military rule — is neither out of the ordinary nor especially deserving of students’ attention. They are taught that this is something Israelis can live with.

References to the occupation and denial of Palestinian human rights is prevalent in Israeli social studies — most prominently in history, civics, and geography classes — as well as in informal education activities such as school trips and seminars. Yet when talking about specific subjects, one must distinguish between the national curriculum, the contents of various textbooks, and questions asked on matriculation exams. The Education Ministry’s “curriculum document” is comprised of a set of guidelines written by a committee of Ministry-appointed experts. The program determines, very broadly, which topics should be taught in every grade.

The textbooks used in Israeli classrooms vary. The books are published by private entities, which hire academic experts to write their content. The authors determine how each topic is presented to the students, and provide verbal explanations, pictures, and guiding questions. The books are then approved by the Education Ministry, ensuring that they meet the general requirements of the curriculum document.

When it comes to matriculation exams, the curriculum supervisor decides which chapters from the national curriculum will be included in the exam. Because every teacher wants their students to pass these exams, they teach according to the chapters selected by the supervisor. Thus, a great deal of power is given to the supervisor rather than either the academic experts who wrote the textbooks, or the expert members of the curriculum committee.

An Israeli discussion — with no occupation

Ben-Amos’ study demonstrates these issues beautifully by diving into the Israeli high school history curriculum. The curriculum is divided into five time periods. The period labeled “Building a State in the Middle East” includes a chapter on the 1967 War as well as the “birth of the Palestinian refugee problem.”

Ben-Amos found that the textbooks present these subjects in various ways. For example, in the book “Modern Times” Part II, there is a chapter on the transformation of Palestinians from “refugees into a nation;” it presents the Israeli debate over the fate of the occupied territories, while mentioning the messianic dimension of Gush Emunim [the right-wing activist movement that helped establish Jewish settlements in the territories during the 1970s], the Jewish Underground terrorist organization, and more. The book “Time Travel — Building a State in the Middle East” also contains detailed references to the Israeli internal debate on the occupation, including a reference to the murder of Emil Grunzweig, a Peace Now activist who was killed by a right winger during a demonstration against the Lebanon War in 1983.

Other textbooks, on the other hand, adopt the point of view of the settlers. In the book “Building a Jewish and Democratic State,” a photograph of the green lawn in Ma’ale Adumim Park, located in the settlement of the same name, appears along the following question: “What can be learned from the photograph about the considerations that led to the establishment of Ma’ale Adumim?” Palestinians are represented in the book through black-and-white images of violence.

In the textbook “Crises and Resurrection” Vol. 3, the occupied territories are referred to as “areas” that had been “liberated,” while the occupation is referred to as a “return to Judea and Samaria, areas where the forefathers and foremothers lived, the heart of the Jewish people.”

Because the curriculum supervisor generally steers the lessons toward topics that will appear on the matriculation exams, most of the students do not actually study any of these versions. Ben-Amos found that not a single matriculation exam since 2010 has included questions regarding long-term changes that have taken place in the occupied territories.

While three different matriculation exams included a question about the “impact of the Six-Day War,” the official correct answers, according to the supervisor, were: expanding Israel’s borders; Jewish access to holy places; increasing areas for settlement; improving Israel’s international status; and an internal Israeli debate on the future of the territories. According to those answers, there is no endless occupation for the Palestinians.

Therefore, with or without a top-notch curriculum or textbooks, graduates of the Israeli education system are not exposed to the nature of the ongoing occupation in their history classes. They are not taught to think about the significance of our military control over a civilian population, human rights violations, or the physical separation and legal apartheid that exists between Jews and Palestinians.

Ideological differences — with no occupation

The high school civics curriculum — which mentions “rifts in Israeli society” such as the “split between doves and hawks” or “the controversies behind that split” — is plagued by similar issues.

In Israel’s main civics textbook, “Being Citizens of Israel,” one can find a short paragraph on the ideological rift “between those labeled leftists and rightists” on the question of resolving the “Israeli-Arab conflict” (p. 461). On page 345, a discussion of Israel’s political parties mentions that the members of the peace camp claim that “Israel’s control over the territories of Judea and Samaria and the Palestinians living there is an immoral occupation.” That’s it.

Like in history, students are guided by the supervisor to study issues that will appear on the matriculation example, preventing any real engagement with the topic of the occupation. None of the matriculation exams over the last 20 years have included questions related to Israel’s control of the Palestinians, which means that it is not being taught in classrooms either.

Unlike subjects such as history and citizenship, geography is an elective course. A key tool for teaching geography is, of course, maps, which are used to reflect the reality on the ground. Ben-Amos refers, among other things, to the map presented below, which was taken from the textbook “Israel, Man, and Space.” 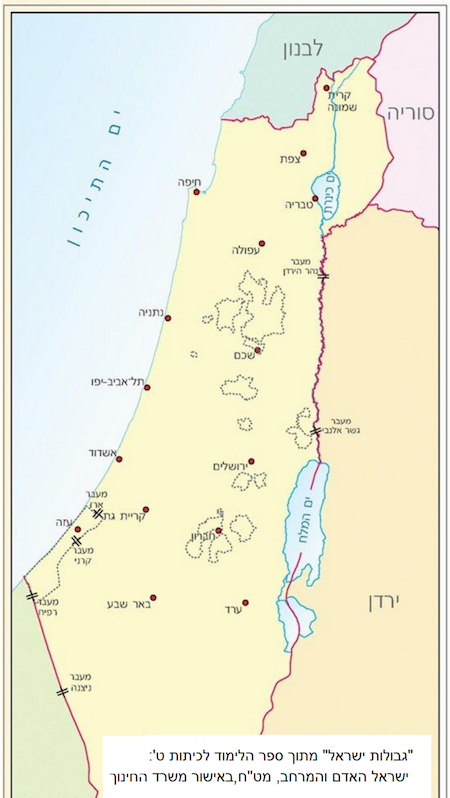 A map of Israel presented in the high school geography textbook ‘Israel, Man, and Space.’

A map titled “Israel’s Borders” presents an Israel that stretches from the Mediterranean Sea to the Jordan River. The Green Line has disappeared. The Palestinians living under occupation are represented by isolated clusters of dashed lines that lack all identification. A million people are represented on a map as a vague blur. Ghosts.

The lay person leafing through these textbooks might get the impression that Israeli high school classes do talk about the occupation. However, Ben-Amos’ research (of which this article has presented only a minimal part) reveals that there is in fact no real discussion about daily life under occupation, the abuse of Palestinians, apartheid, or the role students will be required to play as soldiers just a few months after they graduate.

Like Palestinians, we too are turning our children into ghosts, deprived of the ability to feel and relate to the consequences of our deeds and actions.