Palestinians defy segregation all the time. – In Palestine Today

Every Jewish Israeli who travels to Palestinian-controlled areas of the West Bank and encounters soldiers on the way out is familiar with their shocked response. “What, you were there, in Ramallah?!” they will ask, as if you had just returned from a wild land, as if you had come out alive from hell itself.

The separation barrier, a stretch of concrete wall and metal fences that Israel began building in the 2000s during the Second Intifada, has contributed greatly to this perception, which most Jewish Israelis share. As if the barrier managed to segregate Israelis from Palestinians, us here and them there, beyond the mountains of darkness. As if the barrier “works.”

The tens of thousands of Palestinians who crossed freely into Israel through the recent breaches in the barrier, in many instances under the watchful eyes of Israeli soldiers, are challenging this perception. But for some senior Israeli officials who are familiar with the situation, this is no surprise. The barrier acts mostly as a symbol, and does not really separate Israelis and Palestinians, because Palestinians travel past it all the time. Israel’s security system is relatively indifferent to this movement; it only cares that people don’t talk about it. The only purpose the separation barrier serves, says one of the retired officials who spoke on the condition of anonymity, is to transform the Israeli mind — to create an illusion of separation.

This doesn’t mean that the barrier doesn’t exist. It’s there, it’s cruel, and it makes life for Palestinians extremely difficult, separating them from each other and from their land, or from their work places in Israel. But even on a normal day, and more so in recent years, it does not prevent tens of thousands of Palestinians from entering Israel — whether they have permits or not, through holes in the barrier, or from the dozens of kilometers-long stretches of land where the barrier remains incomplete.

The “erosion” of the wall, the senior officials say, started with the Palestinians, who sought to reach plots of their land that were left on the “Israeli” side, or to work inside Israel. But gradually, Israel’s defense system also discovered the advantages of this so-called erosion. The Israeli army realized that the chances of a Palestinian working in Israel engaging in “terrorist” activity is close to zero. According to one of the officials, Israel’s Shin Bet security agency also began easing the criteria for permits.

The Israeli economy conveniently benefits from this movement, too. Palestinian laborers cost less than Israeli ones, and unlike migrant workers, their earnings are not sent abroad.

The illusion of separation

In the first years after the separation barrier was constructed, with many petitions objecting to its route, it was important for Israel’s defense system to prove to the High Court that the barrier was essential. But after the High Court’s pressure subsided, and when security officials realized that Palestinians who travel to work inside Israel are not a real security threat, it contributed to the barrier’s “erosion,” since its maintenance requires a lot of workers, resources, and funding that the defense system preferred to allocate to other things.

Palestinians walk past a section of the separation wall in the East Jerusalem village of Abu Dis, February 2, 2020. (Olivier Fitoussi/Flash90)

Meaning, what has happened over the past several days is part of an ongoing trend. Most of the Jewish public is unaware of it and continues to believe that the barrier was built for security reasons, and that only because of the wall are there few terror attacks. But the reality on the ground is different, and the defense system is well aware of that. It remains silent, though, because for Israeli politicians, maintaining the illusion of separation is important.

Tours along the barrier this week, in the area between Qalqilya and Tulkarem, exposed a significant number of breaches. In some parts, the gates leading to agricultural land were broken, and dozens of meters of fence were completely pulled apart. According to both Palestinians crossing through the breaches as well as the senior security officials interviewed, army patrols along the fence have decreased.

In reality, even Palestinian laborers who have permits prefer to travel to and from Israel through the holes. This way, they avoid the long lines and the humiliation they are subjected to at checkpoints. Also Palestinian citizens of Israel who reside in or visit the West Bank go through the breaches, which have turned into an “alternative entrance.”

So what happens now? Is there a decision on whether to open the barrier completely? The senior officials estimate that there has’t been a strategic decision on whether to open or close it. But, one of them says, this could be a form of “retaliation” against the Palestinian Authority, since it has stopped its security coordination with Israel in response to Netanyahu’s annexation plans. Opening the barrier — or, more accurately, overlooking the breaches — is meant to show Palestinians what can happen when they halt coordination: Israel will do what it wants, and let Palestinians enter regardless of the PA’s position, in another attempt to weaken it. 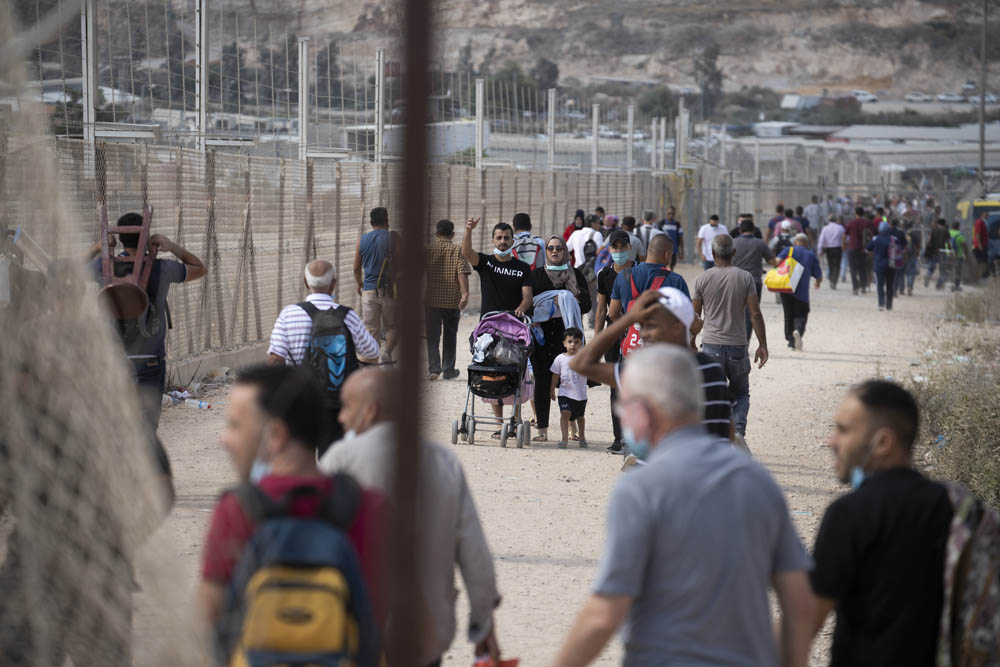 Palestinians walking through a hole in the Israeli separation barrier next to the West Bank village of Far’oun near Tulkarem. (Oren Ziv/Activestills)

This is also how some West Bank residents feel. We spoke to bus drivers who were transporting Palestinians to and from the breaches in the barrier this week, and they said that most Palestinians in the occupied territories feel suffocated after five months of severe restrictions on movement to stem the spread of the coronavirus. These limitations have led to an economic crisis. Many of them are unemployed or don’t get their paychecks from the PA on time. Furthermore, the border with Jordan — the only place Palestinians can travel from abroad, is closed.

It is possible that the soldiers turning a blind eye to the thousands of Palestinians crossing into Israel is a way to “let off steam.” Another possibility is that this was an unplanned consequence of a process that started during the pandemic, when Palestinian laborers would enter via the breaches with Israel’s silent encouragement, while the PA was trying to prevent such movement based on the justified concern that the laborers would contract the virus in Israel and bring it back to the occupied territories.

According to some of the Palestinians who crossed the barrier last week, Israel’s decision to ignore the breaches is undoubtedly one made by the higher-ups “based on political or economic reasons.” For many of these travelers, the motto was “let us live, we want to enjoy ourselves and work in peace.” Israel, of course, is interested in having Palestinians focus on finding time for leisure or worrying about employment instead of resisting the occupation.

Some of the Palestinians who were crossing through the holes also expressed anger and frustration at the PA. These sentiments are nothing new, but the openings in the barrier certainly amplify them.

There is one other thing. If Israel goes ahead with its plan to annex large swaths of the West Bank, the barrier will essentially become redundant, since it will be separating areas that are within an expanded Israel. It is unlikely that the reason for allowing thousands of Palestinians into Israel through the gaps is based on a conscious decision related to annexation, but there is no doubt that this kind of thinking affects the army.

One Israeli official estimates that the flux of tens of thousands of Palestinians into Israel, marketed on social media as “loophole tourism” by Palestinian entrepreneurs who are quick on their feet, will stop. Media publicity has put pressure on the army, the Shin Bet, and politicians — anyone with an interest to maintain the illusion of a sealed barrier. As such, it is possible that the mass crossings through breaches in the barrier will be contained — but not stopped. The increasing “erosion” of the barrier will be hard to stop; like trying to hold back running water.

Still, the ease with which one can pass through the barrier and the scenes of tens of the Palestinians visiting the beach, many of whom are second and third generation refugees from the Nakba, allow us, even if for a moment, to imagine a different future where no separation exists from the river Jordan to the sea.

“I Found Myself in Palestine: Stories of Love and Renewal from around the Globe”

Young Palestinian engineer discusses Palestine through a ‘then and now’ approach in the social media era.