Several years before the official collapse of apartheid in South Africa, Anne-Marie Kriek, a lecturer in international politics at the University of South Africa, published an op-ed in the Christian Science Monitor titled “South Africa Shouldn’t be Singled Out.” Human rights abuses, Kriek wrote, are the norm in 42 African countries, and yet the international spotlight remains on South Africa, which was then ruled by an apartheid regime. True, she admitted, there are some problematic moral issues in South Africa, but those who seek to portray it as a racist regime — especially in the eyes of well-intentioned white liberals — exaggerate and distort the facts.

First, Kriek argued, contrary to popular belief, whites did not take the land from Black South Africans: when the Dutch settled in the country, they found a desolate land that was nearly empty of inhabitants, and alongside other white settlers they made the land bloom. Second, whites did not expel Blacks from their land: Blacks left in search of economic opportunities. Third, contrary to the claims that Blacks face oppression in South Africa, she wrote, they actually enjoy the highest standard of living, the best health care system, the lowest infant mortality rate, the highest life expectancy, the best level of education and the highest income level on the continent. Unlike South Africa, Kriek added, most African countries are corrupt dictatorships.

Why then, Kriek asked, does the world mete out such severe condemnations to South Africa while applying completely different standards to Black African countries? Is one form of oppression more acceptable than another? Perhaps the double standard stems from a sense of guilt over the oppression of Blacks in the West itself (such as in the United States)? Or do we expect a white-dominated state to be more moral than a Black-ruled state? Looking at the facts in Africa, Kriek concluded, “is this the ‘freedom,’ the ‘democracy,’ the ‘decent life,’ ‘a better life for the people of South Africa’ that one-man-one-vote black majority rule has to offer?”

Kriek’s op-ed featured every possible argument put forward by colonial regimes — from making the wilderness bloom, to the improvement in living conditions of the natives, and to the idea that, had the natives ruled themselves, their situation would have been much worse. All these arguments are premised on half-truths and distortions of the historical reality, as well as racist assumptions about the cultural and moral superiority of the colonial settler.

Ben-Dror Yemini is one of Israel’s most prominent journalists, and a regular columnist for the popular newspaper Yedioth Ahronoth. His book, “The Industry of Lies,” repeats each one of these arguments in great detail in order to justify Israel’s policies toward the Palestinians, past and present. In fact, The Industry of Lies is nothing but a concentrated dose of hasbara, or Israeli propaganda. As long as it was published in Hebrew alone, the expectation was that Yemini’s book would be preaching to the choir of Jewish Israelis, who are fed this kind of propaganda from elementary school — if not earlier.

About three years ago, the book was translated into English. As far as I could find, no serious reviews of the book have yet been published — certainly if one does not take into account reviews by scholars who do not study the Israeli-Palestinian conflict and already share Yemini’s views. I have offered an extensive review of the book elsewhere; here I will provide just a few examples of its propagandic nature.

A large section of Yemini’s book is dedicated to the Nakba: the flight and expulsion of 750,000 Palestinians by Zionist forces between 1947-1949. Yemini admits that there were cases of expulsion and massacres that forced many to leave their homes, but places the primary responsibility for the refugee issue on the Palestinians themselves, as well as the Arab countries and the international community. Yemini repeats the oft-heard claim by Israel that the 1948 war, including the Nakba, was a result of Palestinian rejection of the 1947 UN Partition Plan (pg. 54). 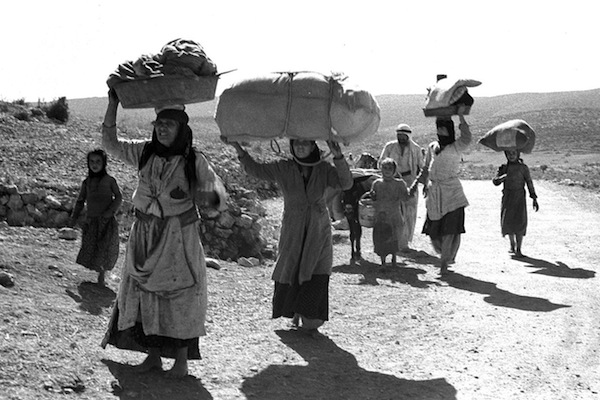 Palestinians flee from their village in the Galilee after it was conquered by Israeli forces during the 1948 war. (GPO)

I met Yemini a few years ago, before this book was published, and spoke to him about the subject. I asked him how many of the Palestinians themselves, in distinction from their leadership, had actively opposed the partition plan and participated in the fighting against Jews in Palestine. Few, he admitted.

This is a well-known fact, yet one that is rarely mentioned even in the critical discourse on the Nakba: only a few thousand Palestinians took part in the fighting against the Jewish community in Palestine following the partition plan. Palestinian society was exhausted and scarred by the 1936–1939 uprising, and the vast majority of Palestinians — even if they viewed the partition plan as an injustice — chose not to oppose it by force. This fact is important for any discussion of the Nakba and the responsibility for it, but in his book and articles, Yemini chooses not to mention it. Rather, he prefers to present Palestinians as a faceless collective whose exile or prevention of return is justified by the policies of Arab leaders.

‘There was international support for transfer’

Yemini further claims that in that period, the international community promoted the idea of population transfer as a pragmatic solution for intra-state ethnic conflicts. “The international community supported transfer. The International Court of Justice gave justifications for transfer. Almost every Arab leader adopted, in one way or another, the idea of transfer […] surprisingly it was among the Zionist movement that support for transfer was very limited,” he writes (pg. 53). In fact, the widespread support for transfer by the Zionist movement has been extensively documented in historical studies, such as those of Benny Morris and Nur Masalha.

But let’s put those aside for a moment. More interesting is the argument that there was international support for such transfers. Indeed, there is a kernel of truth in this claim: as Yemini shows using many examples, in those years the world witnessed numerous cases of bloody ethnic cleansing of various groups around the world, often with the support of international leaders and elites, including in the West. Can it then be concluded that the “international community” supported the transfer of the Palestinians?

If so, it is difficult to understand why the State of Israel made painstaking efforts to conceal the expulsion of Palestinians, while claiming that the cause of their flight were the instructions ostensibly given to them by Arab leaders to make way for invading Arab armies to destroy Israel. Why didn’t Israel simply announce that it was applying a solution that, according to Yemini, was so acceptable to the rest of the world?

If transfer was such a legitimate solution to the ethnic conflicts of the day, one must wonder why the 1948 UN Universal Declaration of Human Rights even bothered stating that “everyone has the right to leave any country, including his own, and return to his country.” One must also wonder why, following the expulsion and prevention of return of Palestinian refugees, observers such as political philosopher Hannah Arendt wrote that “liberals in all countries were appalled by the cruelty and contempt for humane considerations on the part of a government whose representatives, just one year earlier, made their case solely based on humanitarian considerations.”

‘Palestinians are the only group whose descendants inherit refugee status’

Another example is Yemini’s statement that “unlike all the tens of millions who have become refugees, only among the Palestinians are the descendants also considered refugees” (pg. 43). One would expect a journalist who writes so much on this subject to know that the official policy of the UN High Commissioner for Refugees is to grant refugee status under certain conditions to descendants of refugees. Pakistan, for example, has a population of 1.5 million Afghan refugees, around 74 percent of whom are second- and third-generation refugees, meaning they were born in Pakistan or are the children of refugees born there.

‘Palestinians have it better off under Israeli rule’

Yemini similarly discusses the situation of Palestinians under Israeli occupation. “Under Israeli rule,” he states, “the Palestinians have had a long and astonishing, and probably unprecedented, leap in every human parameter” (pg. 156). Yemini goes on to provide data on the increase in Palestinian life expectancy in the occupied territories, along with improvements in health and education, and a decrease in infant mortality, etc.

As can be seen in the example of South Africa, this is an oft-heard claim made by regimes of colonial occupation. One may ask whether the right to liberty, freedom of movement, freedom from arbitrary imprisonment, self-government, etc. are not “human parameters” to be taken into account. But let us leave it at that and remain in the realm of the economic debate and its implications.

Here, too, Yemini’s claims contain an element of truth: it is agreed that the Palestinians’ standard of living has increased under Israeli occupation, especially due to their encounter with the much more developed Israeli economy, and the fact that many of them worked inside Israel until the First Intifada. But a decent discussion on the subject would add that Israel has deliberately prevented economic development in the occupied territories — among other things, so that Palestinian businesses would not compete with Israeli businesses. 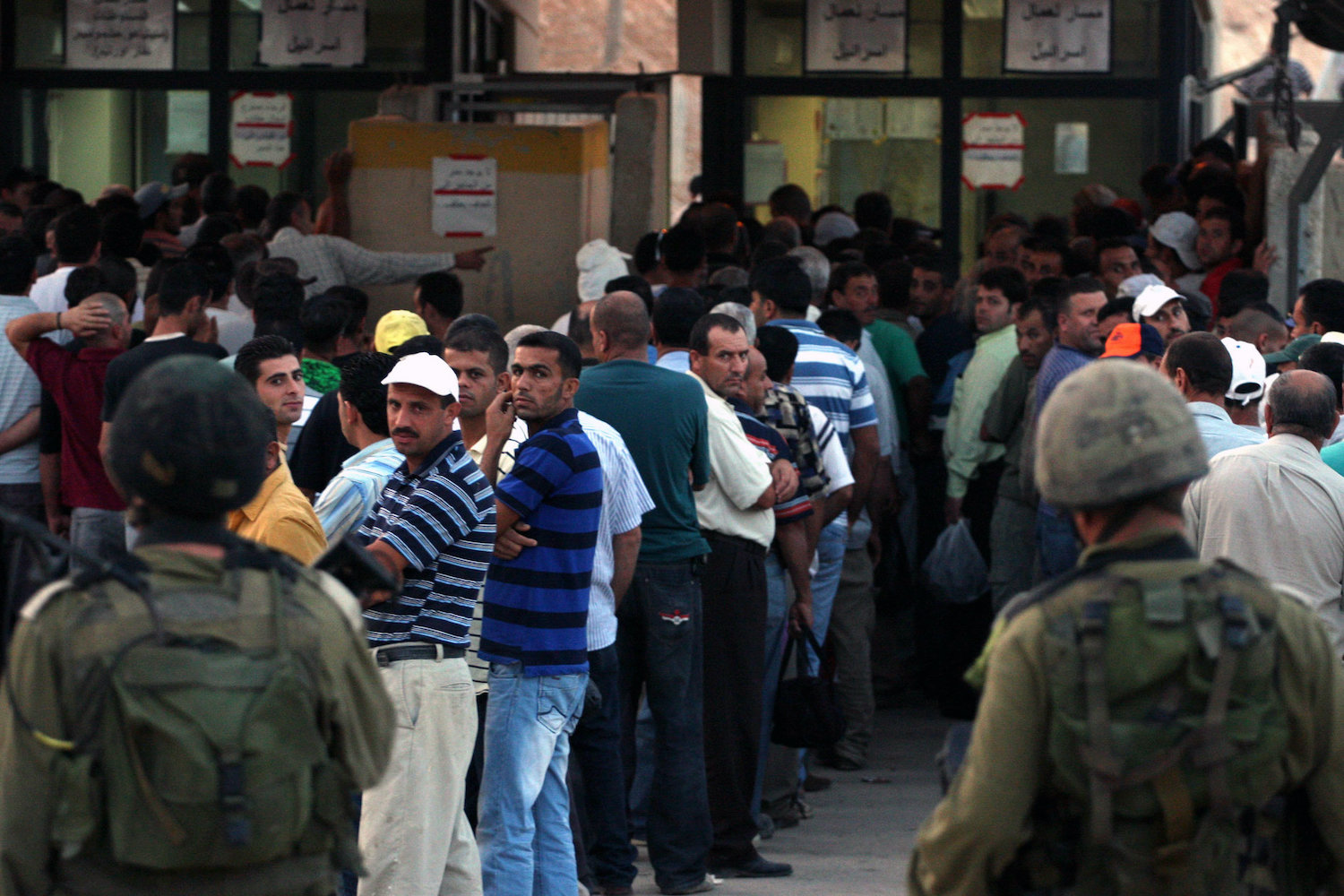 Palestinian workers wait to cross the Isreali-controlled Ni’lin checkpoint, between the West Bank and the Jewish settlement of Modi’in Illit, as they head to work in Israel and nearby settlements on October 4, 2010. (Issam Rimawi/Flash90)

These examples show how Yemini does the exact same thing he accuses Israel’s critics of: blatantly distorting the conflict’s past and present through partial truths, while omitting that which goes against the theses he seeks to promote. Since historical research and reports from international organizations and human rights groups clearly refute most of Yemini’s arguments, he must resort to conspiracy theories: academia, the Western media, the UN, and NGOs are part of the “industry of lies” against Israel.

In a spirit similar to Kriek’s claims about South Africa, Yemini writes that all these bodies single out Israel in order to incite well-intentioned liberals against the Jewish state. What can explain such a large mobilization against Israel, according to Yemini? First and foremost, good old antisemitism. In fact, Yemini goes as far as to state that, “anti-Zionist or anti-Israel propaganda repeats exactly the same patterns of anti-Semitic Nazi propaganda” (pg. 28).

Why does Yemini participate in hasbara?

There is no need for conspiracy theories to explain the fact that Yemini resorts to classic hasbara tropes. Yemini, like some other prominent figures in Israeli public and media discourse, has considerable talent for identifying where the Israeli political center stands and expressing his views cogently, which has qualified him to become a top, influential journalist in Israel. In this sense, he serves, with considerable success, the traditional function of what can be termed the intellectual class in modern societies — namely those who have access to knowledge and the time and resources to disseminate it. The role of this class is to serve the powers that be, all while presenting themselves as critical and independent in their thinking.

As early as the 19th century, prominent thinkers such as Alexis de Tocqueville and John Stuart Mill argued that what they called the “tyranny of the majority” was one of the most threatening dangers to modern democracy, as the urge to conform to what the majority thinks is stronger than the mental censorship the average dictator is capable of. The trouble, however, is that what is accepted by the majority in Israel is likely to be recognized as an all-too familiar propaganda among growing segments of the population in the West, particularly among young people who hold liberal and progressive positions, and who are educated enough to marvel at the rehashing of the colonial archive of the kind Yemini’s book presents.